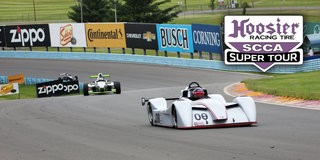 Storylines/Things to Watch:
Final Race Weekend -- The 2018 Hoosier Racing Tire SCCA® Super Tour comes to a close this weekend, June 22-24, with an event hosted by SCCA’s Glen Region at Watkins Glen International in Upstate New York on the 3.4-mile, 11-turn circuit.  A historic locale, racing at Watkins Glen began on village streets. In October of 1948, the Sports Car Club of America conducted its first road race at Watkins Glen with a course that went through the town and Gorge Park. The circuit itself was expanded in 1971, as the ‘70s brought a wide variety of competition. Over the years, The Glen has hosted Can-Am, Trans-Am and Formula 5000 events, as well as Formula One, IndyCar and NASCAR races.

Classes to Watch -- With around 200 entries expected for The Glen Hoosier Super Tour weekend, there will be plenty of action on track. Keep an eye on the American Sedan® and Super Touring® Lite classes, both sporting 10-car fields, as well as the Touring 1 and Formula Vee races, each having 11 cars angling for a win. Of course, the Spec Racer Ford Gen3 and Spec Miata fields will be stout, too. If you can’t be trackside to watch all the racing, follow the action live at www.scca.com/live with timing/scoring, trackside video cameras and Super Tour Radio presented by Hoosier Racing Tire.

A Look Back -- Come Monday, the Hoosier SCCA® Super Tour will have concluded its second season.  The year began in January at Sebring International Raceway in Florida, then took a couple weeks off before resuming activities in February at Circuit of the Americas in Texas. The month of March also saw one race at Louisiana’s NOLA Motorsports Park near New Orleans. April was a busy month with races at Oklahoma’s Hallett Motor Racing Circuit,  VIRginia International Raceway near the Virginia/North Carolina border, and Buttonwillow Raceway Park in California.  The series then hung out on the West Coast in May for a weekend in Oregon at Portland International Raceway.  The season then moved on to its final three races in June with stops at Mid-Ohio Sports Car Course, the annual WeatherTech Chicago Region June Sprints at Road America, and Watkins Glen International in Upstate New York.  Each event included two races for each car class for a total of 20 Hoosier Super Tour races this year.

Championship Chase Continues at Runoffs -- After this weekend at Watkins Glen International, the chase to become a Hoosier Racing Tire SCCA Super Tour Point Champion moves to the 2018 Runoffs at Sonoma Raceway. A driver’s best six Hoosier Super Tour finishes, plus their 2018 Sonoma Runoffs performance, count toward overall Hoosier Super Tour Point totals. Race winners earn 25 points, and 21 points go to second.  Points are then doled out to others starting with 18 and descending to a single point for the 20th finisher.