Competitors “Pour It On” in Portland Sat. at Hoosier Super Tour 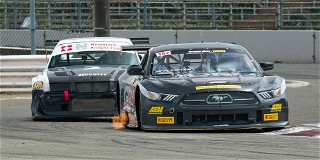 PORTLAND, Ore. (May 19, 2018) – The second of two West Coast Hoosier Racing Tire SCCA® Super Tour events got rolling Saturday at Portland International Raceway (PIR) during a race weekend hosted by the SCCA’s Oregon Region.  Throughout the day, there was plenty of tight competition on the 1.977-mile, 12-turn circuit situated along the Columbia River.

The “come back” of the day went to Super Touring® Under (STU) driver Nicolai Elghanayan in the No. 9 Muellerized Marco Polo Motorsports Lotus Exige S. He quickly moved to the front at the beginning of Saturday’s 25-minute race, but spun off the track during a heated battle and found himself in third. Elghanayan gathered himself and moved along with the task of catching Whitfield Gregg, in a Mazda Miata, and Kevin Lachance, who led the STU class in his Acura Integra.

Reclaiming second place from Gregg about midway through the race, Elghanayan set his sights on Lachance and closed in on the leader.  By the final lap, Elghanayan was back in front and was first to the checkered flag.

The opening day of Hoosier Super Tour competition at PIR featured many other interesting battles throughout the afternoon.  For instance, while the GT-2 lap chart shows that driver Brad McAllister led the entire race in his No. 24 Periodontal Associates Ford Mustang, fans trackside were treated to a much different and exciting chase.  Throughout the entire event, McAllister was shadowed and kept in check by the BMW E36 GTR of Michael McAleenan. Lap after lap, McAllister would open up a bit of a lead, then McAleenan would close right back on his bumper.

“We definitely had a great race,” McAllister said after the win. “We’d be side-by-side, then head would be ahead, then I’d be ahead.

“He was tearing me up in the left turns,” McAllister continued. “We made a few setup changes before the race and we missed the mark on the left turns.  On every left turn, McAleenan would eat us alive.  He did a great job and we had a blast.”

The E Production (EP) race also featured some nail-biting excitement.  In that event, John Mueller and Darren Dilley, both driving similar cars, fought hard for the EP lead early in the action-packed event.

“In the opening half of the race, I was doing what my car would let me,” Mueller said. “My adversary made a clean pass going into turn one.  I took him deep into the corner, but let him have the lead knowing there was lots of racing ahead.”

Later, as the duo managed race traffic, Mueller got his chance to retake the top position.  With a little dust and a lot of guts, Mueller moved to the front and built a gap no one could close.  And with that, he brought his No. 92 Muellerized Mazda RX-7 home to victory at PIR, a track his family has been racing at for 50 years.

Food and fun closed out the day as competitors, volunteers, friends and family gathered together for a light bite.  But competition resumes Sunday morning at Portland International Raceway with qualifying, followed by afternoon races lasting no more than 35 minutes or 26 laps. Follow all the action live at www.scca.com/live.

Photo: Brad McAllister got the win Saturday in a hard-fought GT-2 race during the Hoosier Super Tour at Portland International Raceway.