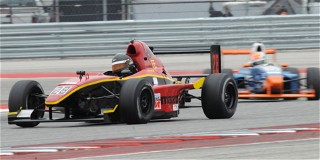 AUSTIN, Texas (February 3, 2018) – The 2018 Hoosier Racing Tire SCCA® Super Tour got going Saturday in Austin, Texas with the first of two Circuit of the Americas races for the weekend at an event hosted jointly by the SCCA’s Lone Star Region and Southwest Division.  Cloudy skies overhead, with intermittent heavy mist at points during the day, kept things interesting and drivers on their toes.

The challenge started early in the Super Touring Under® event.  Greg Amy, in his No. 33 Maximum Attack/Hoosier/Honda Performance/Carbotech/Small House Winery Honda Civic Si, was at the front of the STU field as the race began and led the first half-dozen laps.  Fellow STU competitor David Fiorelli, in a Subaru BRZ, started to close in a bit, and that’s when things went “south” for Amy in Texas.

“I missed a shift and the car cut out,” Amy said about how he first handed the lead to Fiorelli.

Collecting himself, Amy charged forward and closed on Fiorelli, who gave Amy a “point by” to reassume the lead.

“Then I missed a shift again, and the car cut out and he passed me again,” Amy noted while shaking his head.  “But in the last turn, on the last lap right before the checkered flag, I got under him and we got the win.”

Spec Miata ace Chris Haldeman, in the No. 28 X Factor Racing/Mazda/Hoosier/G-Loc Brakes/TPR Consulting/ Black Armor Helmets Mazda Miata, faced a different challenge -- in the form of weather -- on his way to victory in the SM race.  Haldeman went to the front at the very beginning of a race that spent several laps under a full-course yellow.  While officials cleared the track, the mist that hung over the 20-turn, 3.41-mile circuit became more of a drizzle and made things slick.

“It was raining enough that the track conditions were deteriorating very, very quickly,” Haldeman said with a giant grin. “Behind the pace car I was checking the grip and there was none.  At the restart, I went into the Esses for the first time and I was facing every possible direction.  The cars behind me were all over the place.  Then out came the checkered flag.”

One fantastic battle that emerged Saturday took place in Formula Enterprises.  Paul Schneider held the lead for the first half of the race with Liam Snyder and Robert Vanman in tow, all driving Formula Enterprises Mazdas.  After a bit, it became a Schneider vs. Snyder fight when Vanman dropped back.  The lead then changed hands from one moment to the next as the two leaders challenged one another down the long COTA straightaways.

“It was a tough race, but it was clean racing, too,” Snyder said after taking the victory in his No. 28 Snyder Brothers Racing car.  “A yellow flag bunched us together, then we just sort of went at it.  We kept switching places. It was just fabulous.”

Saturday finished up with a magnificent BBQ meal attended by volunteers, friends, drivers, crew and family members.  After a well-deserved night’s rest, drivers and teams will be back at it Sunday morning for another day of COTA competition.  Racing begins at 8:40 a.m. local time with 35-minute events throughout the day. Follow all the action live at www.scca.com/live.

Photo: Formula Enterprises racer Liam Snyder on his way to victory Saturday at Circuit of the Americas.