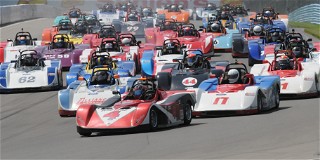 The opening two races were, quite bluntly, epic. A total of 11 lead changes combined in just 24 laps of action between Spec Racer Ford Gen3 (SRF3) and Spec Miata, and the narrowest margins of victory set the scene for the weekend.

The lead pack in SRF3 was as much as six deep through the 25-minute length of the race. Polesitter Denny Stripling dropped out after nine laps, but led across the stripe on the opening lap, and four through six. Scott Rettich took his turn in the front on laps two and three, and Mike Miserendino moved to the lead on laps seven through nine. Max King, in the mix throughout, led lap 10, and across the stripe to start the final lap followed by Rettich, Miserendino, King, John Black, TJ Acker and Grant Vogel in the battle for the podium.

Miserendino, in the No. 11 MBI Racing SRF3 car, made his way around Rettich on the final lap to take the win by 0.26-second, while Acker marched his way to the podium from his fifth spot on the grid to move around King and Black on the final 3.4-mile stanza.

“It was a great race,” Miserendino said. “It’s been 15 years since I’ve been to The Glen, it’s a long way from California. I’m happy to have a great race with Scott, Denny and some others, and my teammate TJ made it to the podium, so it was an overall good day for MBI Racing.”

Not to be outdone, the Spec Miata drivers stepped up with a margin of victory of just 0.114 seconds – from first to third.

Elivan Goulart, Danny Steyn and Tyler Kicera swapped the lead officially four times, but the opening 11 laps were just a setup for the final lap. Hustling for the final position, Steyn was crossed up and sliding from the lead through the bus stop on the final lap, with Goulart and Kicera sneaking by.

The trio were three wide exiting the boot, which Steyn said after the race “you can’t do.” They did, however, and Goulart came into Turn 11 with a narrow lead over Kicera.

From there, it was a drag race to the finish. Kicera chased Goulart side-by-side, with Goulart staying just inches in front for the win. But that didn’t account for a flying Steyn, using a great run and a draft out of the final corner, coming down the inside. Though Goulart and Kicera were only a half-car length apart, Steyn somehow snuck between them to take the silver medal.

“The last half lap was just total fun, insanity,” said Goulart, driver of the No. 70 KRUGSPEED/SCDA1.com/KESSLER Engineering/SCDA Driver Development car. “It was clean, hard, and not an inch given. We came out of the toe and I set up to left side, Danny goes to the inside of Tyler. We go three wide, and I pass Danny at that point. I go and try to pass Tyler into the boot area and didn’t quite make it. We go to turn 11 and get a nice run side by side. This was either going to end really bad or really good. He was fair and gave me just enough room, mirror-to-mirror. One of the best races ever.”

Formula F kept the tight finishes going as the day continued. Pelfrey Racing teammates Josh Green, Tyler O’Connor and Dexter Czuba entered the last lap with the win up for grabs. Green exited the final corner with the lead, but a hard charging O’Connor timed his pass exactly right in the No. 83 Team Pelfrey/TJO Mygale SJ14 and crossed the stripe with a wheel in front, just 0.063-second ahead. Czuba was only 0.191-second behind in third.

“What a fantastic race for the team,” O’Connor said. “We had three rockets out there today. It came down to the length of one of the A-arms at the line. It was close. Josh did a nice job defending into the keyhole of the boot and to be honest I didn’t know if I was going to get another chance. I ended up getting a really good run out of the final corner and popping out at the line. It was barely enough. He’s an incredible wheel man.”

The next two groupings had the makings of the same phenomenal racing before being slowed by, and ultimately ending under, full course cautions.

There was enough time for some track records to fall in those groups, however. Danny Steyn, fresh off the narrow miss in Spec Miata, turned a lap of 2:08.568 on his way to a Super Touring Lite win and a new track record in the No. 9 Ocean Machinery/Nelson Engines/OPM Autosports/G-LOC Brakes/Hoosier Mazda MX-5 car. John McAleer won Prototype 1 in the No. 88 CAS Group Elan DP02 and ripped off a flying lap of 1:45.406 for a Watkins Glen track record, and Scott Rettich made up for his narrow Spec Racer Ford Gen3 miss with a Formula Enterprises 2 win and new track record of 1:50.184 in the No. 17 Alliance Autosport/Red Line Oil car powered by a Mazda engine.

While John Hainesworth, in the No. 95 Maximum Attack Motorsports Mazda RX-7, and Charlie Campbell, in the No. 89 Campbell Brothers Racing/Jesse Prather Motorsports/Hoosier/Carbotech Brakes Mazda Miata, were comfortably out in front of the field for E Production and F Production wins, respectively, the 10-car B-Spec field and drivers Frank Schwartz, Tony Roma; in a Chevrolet Sonic, and David Rosenblum; driving a Ford Fiesta, were battling back and forth for the win. Schwartz, like Campbell and GT-Lite winner William Ball in his No. 60 Ball and Ball/Hoosier Tire Nissan Sentra, set yet another track record in his win driving the No. 4 AACS/Appalachian Race Tire/Mini USA Mini Cooper.

“The B-Spec class is the most fun class to race with,” Schwartz said. “Lots of action, equal cars going back and forth for several laps. It’s my first time here, and I couldn’t be happier.”

A whole slew of track records fell in the final grouping. Kevin Allen, driving the No. 64 Nissan 300ZX in GT-2; Tony Ave, driving the No. 14 Acura RSX in GT-3; Andrew Aquilante, driving the No. 33 Phoenix Performance Ford Mustang in Touring 1; and American Sedan racer Daniel Richardson, in the No. 15 GentiumTech/Hoosier/Hayworth/AutoGear Chevrolet Camaro, all took wins in class and set new records.

“It went really great,” Allen said. “I figured Tim (Kezman) was going to be in my mirrors all day in the Porsche since we qualified 50 milliseconds from each other, but I think I got a better break in traffic than he did and was able to gap him a bit.”

Saturday concluded with a participant party in the Watkins Glen paddock, complete with food, drinks and door prizes. On Sunday, racing begins again at 8:40 a.m. ET with 14-lap or 35-minute races. Follow all the action live at www.scca.com/live.

Photo: The field of Spec Racer Fords gets the green flag.