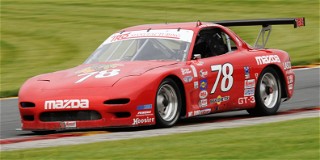 ELKHART LAKE, Wis. (June 16, 2019) – Emerging victorious at the WeatherTech Chicago Region® June Sprints®, now in its 64th consecutive year, is a pretty big deal. But winning twice in a race class to sweep the weekend is something to cherish. That achievement is exactly what 17 drivers accomplished Sunday on Road America’s 4.048-mile, 14-turn circuit during the annual event which was part of the 2019 Hoosier Racing Tire SCCA® Super Tour.

One person who doubled wins on the weekend, at the most opportune time, was GT-3 racer Rob Warkocki in the No. 78 Hoosier/TRO/Mazda RX-7 car. GT-3 races this weekend at Road America were part of the new GT-3 Challenge presented by MPI -- a series supported by Mazda, Max Papis Innovations, Penske Racing Shocks, AiM Sports and Hoosier Racing Tire. By winning both races at the June Sprints, Warkocki becomes the GT-3 Challenge representative from the Midwest Region at the 2019 VIRginia International Raceway SCCA National Championship Runoffs® in October. He will face three other GT-3 region champions at that year-end event for overall GT-3 Challenge championship honors.

Grabbing two wins on the weekend is special. Gathering up three wins, however, is amazing. And amazing is what Misha Goikhberg was this weekend after earning the Formula F win Saturday and sweeping the weekend with two victories in Formula Continental driving his No. 93 Hoosier/Rice Race Prep/Monte Carlo Polo Club Citation.

“It feels very good to win in my first June Sprints,” Goikhberg said Sunday. “I’ve been to Road America many times, just not for the June Sprints. I enjoy coming to Wisconsin and Elkhart Lake. Road America is a great place and one of the best racetracks in the world.”

Danny Steyn, who swept the Super Touring® Lite class over the weekend in his No. 9 Ocean Machinery/Nelson Engines/OPM Autosport/G-Loc Brakes/Hoosier Mazda MX-5, looked poised to claim a third victory Sunday in the Spec Miata (SM) event. He held a substantial lead over the field through most of the race. But as laps ticked down, Steyn was hampered a bit by traffic, giving Tyler Brown and Jim Drago the opportunity to close up. What resulted was a last chance dash to the finish line, which Brown won on Sunday in his No. 07 Sneaky Moose Motorsports/Custom Wireless Inc. Spec Miata.

“Coming up to the checkered flag, I thought that was my only chance to get the win,” Brown said afterwards. “Thankfully, it worked. It was a really fun race.”

In true June Sprints fashion, the SM race was not the only 13-lap event Sunday decided by last-lap excitement. The Spec Racer Ford Gen3 class, which was won by Robeson Clay Russell on Saturday in the No. 31 SVN/Angry LLama/Comprent car, came down to the final corners on Sunday. Russell was in front with only a couple turns remaining, but it was Brian Schofield and his No. 61 PM Racing car that executed the last-moment move to grab victory by a .019-second margin of victory.

“I know how to race this track. I’ve got a lot of wins here,” Schofield said about Road America, America’s National Park of Speed. “Coming up the hill to the finish, he got a little loose and I planted may car just right to get the run. I knew the momentum would carry me up the hill and bring me to victory.”

There’s no rest for Hoosier Super Tour competitors as the series now moves on to the tenth and penultimate event of the season next weekend, June 21-23, at Watkins Glen International in Upstate New York. More information can be found at www.SCCA.com.