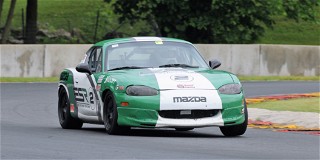 ELKHART LAKE, Wis. (June 15, 2019) – Saturday was the opening day of competition on Road America’s 4.048-mile, 14-turn circuit for the 64th running of the WeatherTech Chicago Region® June Sprints®, part of the 2019 Hoosier Racing Tire SCCA® Super Tour. While the day was cool and overcast, the racing was hot and produced plenty of exciting moments.

The Formula F class got things started off right as eight cars were in the lead pack for the first half of the race. The tenacious group often went two-abreast and three-abreast in their open-wheel rockets down Road America’s long straights. Drivers in the hunt during the 25-minute race included Zachary Rivard, Robert Perona, Matthew Round-Garrido, David H. Livingston Jr., Yuven Sundaramoorthy and Jeffrey Bartz driving a variety of cars that included a Spectrum 14H, Formula Ford 1600, Piper DL-7 and Van Diemen Honda. But it was Misha Goikhberg, in the No. 13 Susi Uhl Art/Rice Race Prep Mygale, who won the chess game in the end by just .037 seconds over Round-Garrido.

“It was tough. You didn’t know whether you wanted to lead or to follow or to kind of hang back and see what the others are doing,” said Goikhberg, who also won Saturday’s Formula Continental® race later in the No. 93 Hoosier/Rice Race Prep/Monte Carlo Polo Club Citation. “It was very close. Had the finish line been a hundred yards down to corner one, maybe I wouldn’t have won that race.”

For those trackside watching the 53-car Spec Miata event Saturday, Jim Drago may have seemed to take an easy win in the No. 2 East Street Racing Mazda Miata. Even though Drago led every lap, the last couple trips around the circuit were anything but easy as Tyler Brown and Preston Pardus were tucked right up on Drago’s bumper. But a slight error by Brown on the last lap gave Drago some breathing room through the final couple corners.

“The last lap, Tyler had me,” Drago admitted. “He was waiting for the back straight, but I sailed it through the Kink and ran the car right out to the curb. I think he followed me, dropped a wheel and spun in the Kink. If Tyler had made it through the Kink, his car was really strong and I don’t think I could’ve defended. But we get to do it all again tomorrow.”

Another pair of Mazda Miata drivers found themselves in a great battle for the F Production win on Saturday. After each experienced some tricky traffic, Ken Kannard and Eric Prill exhibited close, door-to-door racing throughout their event. But in the end, Prill claimed victory in his No. 9 MaxtonsFight.org/Jesse Prather Motorsports/Hoosier racecar.

“We had a great race,” Prill proclaimed. “We had a lot of side-by-side racing. He never quite got in front of me, but we drove around the track next to each other quite a bit. Really clean racing. But at the very end, I just was able to pull out a little bit of a gap.”

Saturday’s GT-3 race took on special importance as it was part of the GT-3 Challenge presented by MPI, a series supported by Mazda, Max Papis Innovations, Penske Racing Shocks, AiM Sports and Hoosier Racing Tire. The GT-3 Challenge consists of five events held around the country, culminating with October’s SCCA National Championship Runoffs®. As a class, GT-3 is gaining momentum once again, with a competitive and exciting race Saturday that saw Rob Warkocki and his No. 78 Hoosier/TRO/Mazda RX-7 charge from behind for the win.

“I didn’t even turn a wheel ‘til today. Been thrashing on the car … and just way behind on everything,” a grinning Warkocki said. “So, starting dead last, I knew I had my work cut out for me. But I know this track so well and the car so well that it was just a matter of putting my head down and keeping it clean. We fought our way through it all the way to the end. But between Paul Young and George Cichon, they kept me honest and I really had to keep pushing hard without letting up. It took everything I had to keep ahead of those guys.”

Saturday concluded with an all participant party where Greg Creamer, the 2019 June Sprints Grand Marshal, regaled a packed house with tremendous stories from his decades of working in motorsports. After a wonderful evening, everybody went back to rest up for a second day of racing that begins Sunday at 9:00 a.m. Central Time with 13-lap races for seven of eight race groups. Race group four is the exception where GT-1, GT-2, GT-3, Touring 1 and American Sedan cars will have a 15-lap event. Follow all the action live at www.scca.com/live.