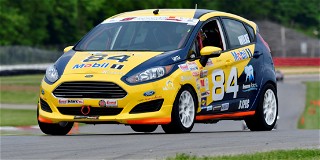 LEXINGTON, Ohio (June 2, 2019) – Hoosier Racing Tire SCCA® Super Tour competitors woke up on Sunday morning to a wet track from a series of overnight storms. While it wouldn’t rain again during daylight hours, Mid-Ohio Sports Car Course began the day as a green track with little grip. Conditions would improve as the day went along and 28 winners were crowned Sunday at the event hosted by SCCA’s Ohio Valley Region.

Conditions were difficult at best for the opening of the Group 1 race. Michael Lavigne snuck away steadily to take the overall and Touring 2 class win, but further back in the field saw John Heinricy and James Coughlin battling to the finish.

Heinricy’s rear-wheel drive No. 35 Hoosier/Hawk/Mobil 1 Toyota 86 had Coughlin’s front-wheel drive Honda Civic Si side by side with him through various stages of the race as the pair navigated both the track and the traffic in the large group. At the finish, Heinricy was 0.740-second ahead for the win.

“It was pretty rough right from the start,” Heinricy said. “I got hit under the bridge in the wet. I was on the outside there, and the car on the inside was going the exact same speed as I was. I said, ‘I don’t think this is going to work,’ and it didn’t. I had a challenge all the time from Coughlin, he did a great job.”

Mike Miserendino drove his No. 11 MBI Racing Spec Racer Ford Gen 3 to a win Sunday in a wild race. The track went full-course yellow early for an extended period, and completed only 15 of the scheduled 21 laps in the 35-minute time period. Miserendino was able to sneak away at the end, finishing a remarkable 1.635 seconds ahead of Sandy Satullo.

“That race was crazy,” Miserendino said. “It was like Survivor, and I survived. I’m sure I wasn’t the quickest car, but I was able to take advantage of some strange situations and end up with a victory.”

The B-Spec field put on a show during the production group race. Tom Coury kept his Mazda2 on the bumper of eventual winner Fritz Wilke throughout the race, and Rob Piearczyk was just behind in his Honda Fit. Wilke’s No. 84 Mobil 1/Frozen Rotors/Capaldi Racing/Hoosier Tire/Ford Performance/Ink Frenzy/Hawk Brakes Ford Fiesta shook loose of Coury late. And when the race ended under full-course caution after 18 laps, he was able to cruise for a win.

“We had a blast with Tom,” Wilke said. “We’ve been battling for a couple of years now and it was so much fun. We raced each other clean. I had an absolute blast today.”

In the same race group, Eric Vickerman swept the H Production weekend when he made his way around seven-time Runoffs® National Champion Steve Sargis.

“It was a pretty tough race,” Vickerman said. “Steve is obviously the ultimate champion. He’s been one of my idols in Production racing. We chased him back down and then got into traffic and that made it tough. Obviously, ending under caution made it stick a little bit better for me.”

Owen McAllister, at only 14 years old, swept the weekend in Formula Mazda driving the No. 39 Driven to Find a Cure/Glacier Chill machine. Meanwhile, James Libecco made his second podium appearance of the weekend on Sunday after again claiming the Formula Enterprises win in his No. 98 Alliance Autosport/Allied Dermatology racecar.

“It was a really spectacular race,” McAllister said Sunday. “The track conditions were really slippery, which kept things interesting. It was just an all-around great drive and lots of fun.”

Jim Drago swept the Spec Miata weekend in his No. 2 East Street Racing Mazda Miata in an epic Spec Miata dogfight. Drago started second and chased down polesitter Jared Thomas in the opening laps. Running side by side, Thomas went wide in the keyhole and off the track on lap five, opening the door for Drago. Thomas fell to fifth, and Drago teamed with Michael Carter to move away from the field.

Once in the clear, the pair watched the laps count down. Carter went to the lead on lap eight before Drago found his way back to the front on the 19th lap. Carter challenged again, but Drago held on for the final three laps and the win.

“Jared took the lead and I tried to press him a little bit,” Drago said. “He made a mistake and went off in the Keyhole. Michael and I tried to get it a two-car race. We stayed nose to tail to make sure Jared couldn’t get back into it, because he was really fast today. I waited until I thought it was two to go, but it was really three laps to go. My handling was really good, but Michael was better in turn seven and he’s generally better on the brakes. That’s the worst part for him to be better than me at. We went through and had a little touch at the top of Madness. I enjoy racing with these guys.”

In GT-2 on Sunday, Pete Peterson fell behind at the start in his No. 98 Toyota Celica, but then used an early yellow flag to mount a steady climb through the field. With the help of some attrition, he made up six spots and took the class win.

“The tires were cold, and it took me five or six laps to get going,” the seven-time National Champion said. “Fortunately, we had a caution to bunch us back up and let me catch back up a little bit. Then some other people had misfortune, so I’m just happy to be here.”

Sunday concluded with a wild Formula 500 race. Calvin Stewart, driving a Novakar Blade F600, and the NovaRace Blade of Eric McRee were well in front of the field and battling for the class and overall lead when the pair came together in Turn Four with one-and-a-half laps remaining. Stewart slid into the gravel trap and McRee ended up high-sided on the curb, handing the win to a happy James Weida in his No. 22 Weida Apartments/Formula X-1 Scorpion W1/Rotax sled.

“I was super surprised,” Weida said. “They checked out. I had nothing for them. I just tried to stay clean. I ran a clean race and was lucky.”

The Hoosier Racing Tire SCCA Super Tour continues with the ninth event of the season June 14-16 at Road America during the WeatherTech Chicago Region June Sprints® in Elkhart Lake, Wisconsin. More information can be found at www.SCCA.com.

Photo: Fritz Wilke held off the field for a B-Spec win.