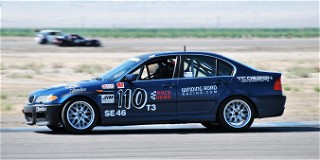 TOPEKA, Kan. (July 27, 2018) – The SCCA® U.S. Majors Tour® racing season has concluded for 2018 out west. Nearly 600 racers took part in the Western Conference’s 14-round schedule that held court at seven different venues stretching from Seattle to Los Angeles. Drivers who did the best across the 28 different classes duly garnered Western Conference championships.

Similar to what happened in the Southeast Conference this year, a couple Western Conference competitors managed to gather up two different class Championships. In Spec Miata, a class that boasted nearly 90 different competitors over the season, it was Mark Drennan who ended up atop the heap. Drennan also managed to drive a BMW Spec E46 to the Touring 3 Conference Championship. The other driver to take multiple Championships was Taz Harvey. A Mazda man, Harvey claimed the top spot in GT-3 driving a Mazda RX-7, and duplicated Championship efforts in the GT-Lite class with a Mazda MX-5 Miata.

The Western Conference also produced several close points battles.  In Formula F, Rick Payne and his Van Diemen Honda managed to win the Championship by only five points over the Swift Honda DB6 of Charles Horn. Formula Atlantic was decided by four points with Jay Horak besting John Purcell, both driving Star Pro Formula Mazdas.  A three-point spread decided the H Production Championship as Michael Cummings, driving an Austin Healey Sprite, beat out Jason Isley and his Toyota Yaris. Then in B-Spec, it was a battle of Mazda 2s as Cherie Storms managed a two-point Championship win over Jake Pipal. And finally, it was only one point that decided the E Production king as Glen McCready and his Mazda MX-5 Miata barely grabbed the Championship over the Mazda RX-7 of Kale Swifts.

The Western Conference began its racing season in January with Round One and Round Two at Auto Club Speedway east of Los Angeles. The Conference then took a break in February before resuming the schedule in March at Willow Springs International Raceway just north of Los Angeles.  Two race weekends were then conducted in April, the first being at Thunderhill Raceway Park in Northern California, followed by a Hoosier Racing Tire SCCA Super Tour event at Buttonwillow Raceway Park in California’s Central Valley. Western Conference competitors then headed north in May for another Hoosier Super Tour weekend, this one at Portland International Raceway in Oregon, and then Round Eleven and Twelve just south of Seattle, Washington at Pacific Raceways. The Conference then wrapped things up in June at Sonoma Raceway just north of San Francisco, a track that will also host the 2018 SCCA® National Championship Runoffs®.