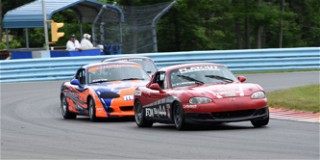 WATKINS GLEN, NY (June 24, 2018) – Sunday racing at Watkins Glen International, on a weekend hosted by SCCA’s Glen Region, marked the final day of competition for the 2018 Hoosier Racing Tire SCCA® Super Tour.  And the last day was a doozy as Mother Nature conspired to challenge the race-craft, talent and strategic thinking of both drivers and teams during 14-lap races.

The first group to run the 3.4-mile, 11-turn circuit in the morning produced an interesting H Production (HP) race. Nick Engels and his Toyota MR2 took the lead early with Jason LaManna, in a Volkswagen Rabbit, giving chase. But LaManna pulled into the pits after a few laps, leaving Engels out in front all by himself.

Meanwhile, HP racer Fred White, who started 13th overall, was churning out laps.  He gained a position in the HP class after Tom Broring spun in his Triumph Spitfire, then moved to second after LaManna dropped out.  With about five laps remaining, Engels fell to the wayside with a problem. This left the lead to White, who went on to claim his first-ever Hoosier Super Tour win driving the No. 82 Hoosier Honda CRX.

“Nick (Engels) pulled over in front of me as we were coming out of the Toe of The Boot. I went out along the guardrail and almost into the wall to pass by,” White recounted about taking over the lead. “This first Hoosier Super Tour win feels so good. It’s a great day. I can’t be happier.”

The struggle for Spec Miata (SM) supremacy Sunday actually started prior to cars taking the track.  Before the race was scheduled to begin, a band of rain came through and dampened the course. On grid, SM competitors were out of their cars and chatting with one another about whether to use dry or rain tires.  The conclusion was dry rubber, with the general consensus being, “well, we’re all in this together.”

At the start, as the 22-car field came to the green flag, Saturday winner Tyler Kicera struggled right away as his left foot accidently hit the brake pedal instead of the clutch.  To the front went Danny Steyn, Michael Carter and Ralle Rookey, followed by Nick Leverone, Kicera and Elivan Goulart.

As the race progressed, Steyn and Carter set the pace up front while Kicera picked off competitors lap by lap until he was running second.  Steyn, Carter and Kicera then took turns at the front for the last quarter of the 14-lap race. As the white flag flew to start the last lap, it was Kicera with Steyn and Carter in hot pursuit.  But Kicera, driving the No. 44 Flatout Motorsports/XFactor Engines/Carbotech Mazda Miata, would not be moved from the top spot and swept the SM class with two wins over the weekend.

“I just felt like my car was handling much better than everybody in front of me, so it allowed me to make up time with the draft on the back straight,” Kicera said. “But I couldn’t get a breakaway. I think Carter, Steyn and myself traded the lead at least four or five times in the last couple laps. It was extremely competitive and a lot of fun racing with those guys.”

After lunch, a hard rain and some fog moved over the circuit and cut short the day’s fourth race group featuring GT-1, GT-2, GT-3, Touring 1 and American Sedan classes.  After a weather delay, things got going again with open-cockpit Formula 500, Formula F (FF) and Formula Vee (FV) racers -- most of which hit the wet track on rain tires.  In that race group, young FF drivers Jonathan Kotyk and K-Hill Motorsports teammate Yuven Sundaramoorthy had a great battle for a bit, swapping the lead from one corner to the next for a few laps.  But it was Kotyk in the No. 81 Gapuard Mygale who got the win and swept the weekend.  And in the same race group Sunday, driver Jonathan Weisheit was dominant in his No. 61 JK Technologies XP-1, earning his second FV win during the Watkins Glen Hoosier Super Tour weekend.

To close out the weekend, something unique took place in the Spec Racer Ford Gen3 (SRF3) class.  Throughout much of Sunday, the decision to run dry or rain tires was on the minds of competitors.  That decision was very much a determining factor in the SRF3 race.  With the weather being so varied and unpredictable throughout the day, most of the SRF3 field opted for rain tires.  Ben Albano, in the No. 41 Ten Eyck Group SRF3, decided to run dry tires.  That was a good decision, indeed, as precipitation stayed away during the SRF3 event and Albano stormed off to what was ultimately a 62-second margin of victory -- which is far from the norm in that car class.

“The one call I made to put the car on slick tires, it paid off,” a calm-and-cool Albano said after the race. “I got a good start, just started to slowly gap the field, and I never looked back.”

Photo: Sunday’s Spec Miata battle at Watkins Glen International during the Hoosier Super Tour was tight, but Tyler Kicera (No. 44) ended up with the win.