Weekend Sweeps for Some at Portland Hoosier Super Tour 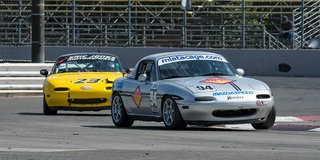 PORTLAND, Ore. (May 20, 2018) – The Hoosier Racing Tire SCCA® Super Tour wrapped up its West Coast schedule Sunday at Portland International Raceway (PIR) during a weekend hosted by the SCCA’s Oregon Region.  Eighteen drivers managed to sweep class wins over the course of two days, but that feat certainly didn’t come easy in many cases.

One such example would be Mike Miserendino who claimed both Spec Racer Ford Gen3 (SRF3) victories in his No. 11 MBI Racing SCCA Enterprises SRF3 racecar. That makes four consecutive Hoosier Super Tour SRF3 wins thanks to his sweep a few weeks ago at Buttonwillow Raceway Park in California.  However, none of those wins came easy as competitor John Black fought tooth-and-nail with Miserendino during each of the races, and Sunday was no exception on PIR’s 1.977-mile, 12-turn circuit.

Black took the lead early Sunday with Miserendino tucked in right behind.  The two drivers put a gap on the rest of the field, then started jockeying for the lead.  One lap it would be Miserendino in the lead, the next lap Black would be out front.  About 20 laps in to the 26-lap race, the two leaders began to work through traffic.  It was then that Black encountered a little trouble and Miserendino scooted away to victory.

“It was a total dogfight between me and John,” a smiling Miserendino said after the race. “He got messed up by a lapper and I benefitted from it. But I feel bad for John. He’s a fun guy to race with and it was going to be a great race to the end. But sometimes you get lucky in racing and I’ll take wins any way I can get them.”

Ken Sutherland, in his No. 94 Wyatt Fire Protection/Miatacage.com/Pittman and Brooks CPA Mazda Miata, was another driver who worked extremely hard for back-to-back wins over the weekend, this time in the Spec Miata (SM) class.  On Saturday, Sutherland had a race-long duel with SM ace Tyler Kicera and emerged the victor.  On Sunday, the same battle was shaping up again.  But after a couple laps, Kicera fell away, which left Sutherland with a very healthy gap on the rest of the field.

To race fans trackside, it looked like Sutherland had another win locked up.  But somehow, Eric Jones started turning blazing laps and hunted down Sutherland.  Then on lap 16, Jones took the lead.  For the next seven laps, Jones and Sutherland where hooked together as they played a game of cat-and-mouse to see who would walk away the winner.  In the end it was Sutherland who reached the checkered flag first.

“I don’t know how Jones closed the gap,” Sutherland admitted. “All I saw was his yellow car getting bigger in my rearview mirror.  Honestly, I don’t know how I won the race.  He was definitely faster because he tracked me down from a long way back.  But it was a great race.  Great racing with Tyler, great racing with Eric. I couldn’t ask for more.”

One class that didn’t see a repeat winner on Sunday was Formula Vee (FV), but that’s not for lack of effort.  Saturday’s winner, Dennis Andrade, was out front again Sunday in his No. 87 D&D Racing Vortech.  But for the back half of the race, Andrade shared the lead with Stephen Saslow, also in a Vortech, and Quinn Posner driving a Protoform P3 racecar.

The on-track FV battle was mesmerizing. At times, it almost appeared to be a beautiful, synchronized dance.  But with only a couple laps remaining, things got even more exciting as the FV leaders dealt with faster race traffic.  Going into the first turn, Saslow’s car broke loose and spun -- shooting across the track and just missing fellow competitors.  Posner took evasive action, and Andrade exploited the opportunity to extend his lead.  It was Andrade who led the FV field to the white flag, but it was Posner who made the last-lap pass to win in his No. 9 Posner Law Office-sponsored car.

“It was a great race, swapping the lead back and forth the whole time,” Posner said. “But I got Dennis going down the back straight into turn 10 on the last lap. I knew where I could get Dennis. He was having some issues with his car in turns four through seven, so I just made up all my time there and then drafted him down the back straight. That’s what did it.”

With its trip to the West Coast complete, the Hoosier Super Tour series moves back east for the last three events of the 2018 season.  Next up is a June 1-3 visit to Mid-Ohio Sports Car Course in Lexington, Ohio. Follow all the action live at www.scca.com/live.