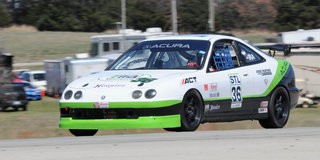 In the Super Touring® Lite (STL) race, Saturday winner Cliff Ira moved to the lead early on Sunday.  But four laps into the race, Jake Anton and his Mazda Miata found a way around Ira while battling in traffic.  The two continued on, nose to tail, for a few laps before Ira made a move in to turn one and regained the lead in his No. 36 Fira Motorsports/JPM Acura Integra GSR.  He extended that lead throughout the rest of the race and brought home a win.

“Jake had a good run today,” Ira admitted.  “I got blocked by an STU car and Jake got by me.  I had to run him down.”

Mimicking the STL event, the Super Touring® Under (STU) race saw Saturday winner David Fiorelli, who started at the rear of the field Saturday, shoot to an early lead on Sunday.  However, a few laps later it was Billy Roberts, driving a Mazda MX5, who was leading the STU class.  The two drivers remained in close contact until lap 13 when Roberts spun from the lead, handing Fiorelli the top spot and victory in his No. 190 Subaru BRZ.

“Billy got out ahead of me,” Fiorelli said. “I caught back up to him, he made one mistake and that was all it took.  We just had to bring it home.”

But the epitome of perseverance took place during the fifth race of the day.  On the very first lap, Tim Smith, winner of Saturday’s GT1 class, and Max Nufer, winner of Saturday’s GT2 class, had contact.  Nufer lost a couple positions and Smith ended up off the racecourse in his Chevrolet Camaro, but rejoined the fray behind everyone else.  Up front, David Fershtand inherited the GT1 lead, and Don McMillon held the GT2 top position.

Smith, however, was by no means done.  By the fourth lap, he was passing cars at the rear of the field, picking one car off after another.  By lap 11, Smith had moved up to fourth place in GT1, but was still 10 seconds behind leader Fershtand.  Then lap after lap, Smith cut into the leader’s advantage until on lap 20 he passed Fershtand for GT1’s top spot.

Alas, Smith used up his tires pushing so hard to get back up front.  Fershtand recognized the situation and pounced.  He closed in on Smith and regained the lead with only a handful of laps remaining in the race.  Smith fell back a bit, but made a final charge on the last lap, poking the nose of his car alongside Fershtand.  But it wasn’t enough and Fershtand claimed a well-earned victory by half-a-car in his No. 05 Fershtand Race Prepared Oldsmobile Cutlass.

“I put my foot down because I knew Tom would get going again,” Fershtand said about taking the early race lead. “Sure enough, he did.  And there at the last corner, he was right on me and almost nipped me at the finish line. It was pretty close, but I held him off.”

While the GT1 fight was going on, things were a bit calmer in the GT2 challenge. McMillon, in a Chevrolet Corvette, maintained a gap on Nufer.  But with only a couple laps remaining, McMillon spun in the last turn and was unable to restart his car.  Nufer went on to claim the GT2 win Sunday in his No. 3 Manufacturing News/Nufer Race Engineering Chevrolet Camaro.

“Had some good battles with other GT2 cars,” Nufer said with a smile after the race. “I had to work my way back up through the other cars. Tried to keep it a ‘nail biter’ for everyone watching.”

There’s no rest for Hoosier Super Tour competitors as the next race weekend, April 13-15 at VIRginia International Raceway, is only days away.  Then to wrap up the month, the Hoosier Super Tour will make its first West Coast visit this season with an April 27-29 visit to Buttonwillow Raceway Park in California. Follow all the action live at www.scca.com/live.