Hoosier Super Tour Back for More at NOLA Sunday 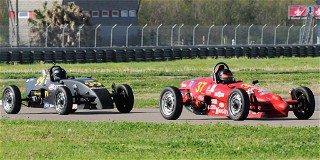 AVONDALE, Louisiana (March 4, 2018) – Sunday brought to a close two glorious days of weather and racing at NOLA Motorsports Park for the 2018 Hoosier Racing Tire SCCA® Super Tour season during an event hosted by the SCCA’s Southwest Division. While nearly all in attendance crowed about the weekend, some drivers had a little more to boast about as they walked away with multiple trophies and bottles of Mazza sparkling wine.

While the Formula Vee field this weekend might have been a little light, that didn’t stop the excitement as Charles Hearn, in his No. 37 Noble Racing/Hearn Contractors Volkswagen Vortech, and Mitchell Ferguson, in his Vorscha GB4 racecar, displayed incredible, wheel-to-wheel skill both Saturday and Sunday.  The two drivers swapped the top spot lap after lap and corner to corner too many times to count, sliding their slender cars around the 2.75-mile, 16-turn circuit like raucous teenagers.  Hearn earned slight wins both days, but each man climbed from his open-cockpit car with a grin easily visible beneath his helmet.

“Mitch is a tough competitor and a clean racer,” Hearn noted.  “He absolutely put his car in places I didn’t think were possible, and he made it stick.  I hold the track record here at NOLA Motorsports Park, but Mitch still taught me some things today. We had a lot of fun.”

Sherman Chao was another driver who claimed back-to-back wins during the weekend, earning dual victories in the Prototype 2 class.  But he had to work hard for the win Sunday chasing fellow P2 competitor Lucian Pancea in his Stohr P2 machine.  Spectators around the circuit witnessed Chao pushing as hard as he could, sliding his No. 3 Lee Racing/GDRE/Hoosier/Hawk Stohr WF-1 to the very brink.  At one point, Chao had the car almost completely sideways coming out of the last turn and on to the main straight.  The P2 race might have been a nail biter right to the end, but Pancea experienced troubles and pulled into the pits.

“I had to drive the wheels off my car. There’s no other way to keep up with Lucian,” Chao admitted after the race. “It was a lot of fun.  NOLA Motorsports Park is now a destination track for me.  I’ll be coming back for many, many years.”

While a handful of other drivers across 26 different car classes also managed to gather two wins during the weekend, two fellas are on longer winning streaks.  B-Spec racer John Phillips has claimed six straight Hoosier Super Tour victories in his class driving the No. 43 Phillips Race Prep Honda Fit.  Equaling that feat is Robeson Clay Russell who has now claimed six straight wins in his No. 31 Comprent Motorsports SRF3 car, sweeping the 2018 season to date.

With the party now over at NOLA, the Hoosier Super Tour looks ahead to a very busy April with events on the calendar for April 7-8 at Hallett Motor Racing Circuit in Jennings, Oklahoma; April 13-15 at VIRginia International Raceway in Alton, Virginia; and the April 27-29 event out west at Buttonwillow Raceway Park in Buttonwillow, California. Follow all the action live at www.scca.com/live.