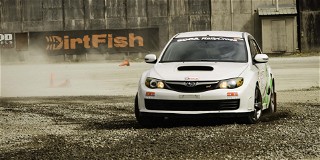 SNOQUALMIE, Was. (July 25, 2017) — Round three of the DirtFish SCCA® RallyCross® National Challenge rolled onto the pristine courses of DirtFish Rally School July 21-23 in Snoqualmie, Washington with 75 competitors looking to take away a victory. Drivers from as far away as Colorado, Kansas and Canada battled through a very competitive weekend across several classes.

The comeback story of the weekend goes to Norman Hayton and Greg Petroski in prepared FWD. They broke an engine mount and an axle, causing penalties -- a DNF for Petroski and DNS for Hayton. The rally community scrambled, offering cars, parts, tools and help. After a lunchtime parts dash, they managed to fix it with Hayton winning and Petroski taking second.

The excitement in modified FWD was competitor Jason Bailey, who recently returned from competing in WRC Mexico. When asked about his race goals, he claimed they changed Saturday evening after realizing he was losing to a Neon. Unfortunately, it wasn’t enough and he took third behind Kent Hamilton and Alan Flemming.

In stock FWD, Chad Berg got off to a slow start, but had about one second on Jeff Evans and nearly five on Geoff Thomas Saturday night. Thomas returned fire with immediate speed Sunday morning and clawed back that time and more, finishing just .132 ahead of Berg and .585 in front of Evans.

Prepared AWD saw 16 drivers and robust competition through most of the class. The first nine positions were separated by only 45 seconds. First place went to Jeffery Olmstead and Austin Dowda took second in the crowd-favorite 1991 4WD Honda Civic wagon.

Modified AWD had excellent competition with about one minute separating the first 10 of 19 cars. Kory Nelson utilized the amazing grip of his Eagle Talon to just barely edge Andy Miller by 0.376. Todd Briley took third.

Matthew Dickinson stole the show in stock AWD, winning by over 30 seconds. The next five positions were extremely competitive and were separated by less than 10 seconds, with Sam Ellis in second and Cris Tudor in third.

Stock rear saw Howard and Linda Duncan take first and second in their Miata ahead of Ed Abiva, who was fielding a new BMW build.

DirtFish General Manager Malli Sheaffer commented, “We are proud to host the 2017 DirtFish SCCA® West RallyCross® National Challenge. We would like to thank the organizers and volunteers for making it successful and we are hopeful that our continued partnership with the SCCA will bring more people into RallyCross!”

Next up is the 2017 DirtFish SCCA RallyCross National Championship being held October 20-22 in Topeka, Kansas.  Registration for that final event opens August 1 for champions over the last five years, followed by open registration August 8 for all other competitors.