2017 Fitzgerald Rookie of the Year and Kimberly Cup Awarded 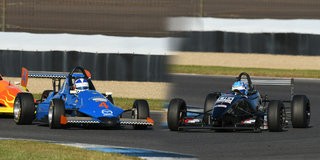 TOPEKA, Kan. (Feb.20, 2018) -- Sports Car Club of America® has named recipients for the 2017 Jim Fitzgerald Rookie of the Year honor and 2017 Kimberly Cup award.  Rookie of the Year goes to Austin McCusker, the Formula Continental® driver from Glen Head, New York; and the Kimberly Cup has been awarded to Melvin Kemper Jr., a Formula Mazda racer from Toledo, Washington.

Rookie of the Year is presented to the SCCA® Road Racing driver showing the greatest promise. The award is based on driving ability demonstrated during the first season of National competition. Winners are selected by the Club Racing Board based on nominations submitted by Executive Stewards.  The Kimberly Cup is awarded to the SCCA driver who has shown the greatest improvement in the past year and is chosen by the Club Racing Board.

McCusker, a member of the New York Region, earned Rookie of the Year after winning in his National Championship Runoffs® debut.  He took the lead from pole at Indianapolis Motor Speedway in Formula Continental and fought off all challengers in his No. 06 Dot Works/Primus Racing Van Diemen Ford. After one aborted start attempt, the field took the green on lap two and there was a scramble up front as cars slid on cool tires. Defending champion John LaRue and another car made contact, sending LaRue into the turn three gravel trap. That spin, coupled with car trouble for another competitor in a separate incident, brought out a full-course caution. On the lap-six restart, McCusker and Tim Minor broke away. Minor put pressure on McCusker, but lapped traffic and course conditions hampered his efforts.  In the end, McCusker’s margin of victory was only 1.131 seconds.

Kemper, a member of the Northwest Region, earned the Kimberly Cup after winning the Formula Mazda class in his No. 4 Mazda/Goodyear Star Formula Mazda during the Runoffs at Indianapolis Motor Speedway -- his first win in seven appearances at the National Championship.  On a restart after a full-course yellow, Kemper accelerated using the draft and squeezed by Mike Anderson on the inside to take the top spot. Kemper and Anderson pulled away from the field and continued to battle each other through the white flag. On the final lap, Anderson got caught in traffic and Kemper extended his lead. Anderson fought to catch up, but spun on an attempt to overtake Kemper who went on to claim a nearly 10-second victory.

Kudos to both McCusker and Kemper for their achievement.