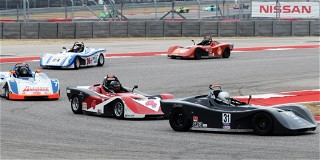 AUSTIN, Texas (February 4, 2018) – After Saturday’s cloudy skies and heavy mist, Hoosier Racing Tire SCCA® Super Tour competitors were hoping to be greeted by better conditions Sunday.  But Mother Nature decided differently as a thick fog blanketed Austin, Texas and Circuit of the Americas Sunday morning, delaying the start of racing by a little more than an hour.  But once things got rolling, excitement cranked up at the event hosted jointly by SCCA’s Lone Star Region and Southwest Division.

Robeson Clay Russell is on a hot streak.  The Spec Racer Ford Gen3 driver took the class win Saturday at COTA in less-than-perfect conditions.  Then under sunny skies Sunday afternoon, he took his No. 31 Comprent Motorsports SCCA Enterprises SRF3 to victory lane again.

Sweeping a Hoosier Super Tour weekend is impressive in any class, especially one with more than 80 challengers.  But Russell has now won all four Hoosier Super Tour SRF3 events this year, having also swept the weekend at Sebring International Raceway in early January.

“I’ve got the car dialed in pretty good right now and I’m pretty happy with the performance of it,” said Russell, who has spent four years racing in the SRF3 class. “Winning is a lot more fun and a lot less frustrating.”

With experience and his first Majors win last year, Russell has gained pace -- and confidence.  He’ll be a racer to watch in a few weeks at NOLA Motorsports Park during the next Hoosier Super Tour stop in March.

“There are really talented drivers in this class.  It’s one of the most competitive classes in the nation,” Russell said.  “I’ve got more seat time and I’m learning more. I know I can run with the fast guys.”

Throughout the more than 25 car classes that compete within the Hoosier Super Tour series, there are lots of fast folks in fast cars.  One such person is Touring 1 driver Andrew Entwistle.  On Saturday, Entwistle had a cakewalk to victory, leading almost the entire way in his No. 78 HellHound Motorsports/Phoenix Performance/Ford Racing/ Hoosier/Penske/Hawk/Brembo/Bosch Ford Mustang Boss 302R. He was hoping for the same Sunday. However, Mike Henderson and his T1 Dodge Viper looked to thwart that hope -- and Entwistle didn’t help his cause.

“I missed a shift at the start and ended up behind a couple of GT-2 cars,” Entwistle said of his effort Sunday. “Mike, on the other hand, made a great start and moved up a number of places.

“It took me a number of laps to figure out how to get by the GT-2 cars because they’ve got so much more horsepower,” Entwistle continued explaining of the steps he took to claim Sunday’s victory.  “Eventually, I managed to run Mike down.  But I think his car was a little ‘off’ today after yesterday’s crash.  But he fought hard the whole way and it was a great race.”

In contrast to Entwistle’s weekend, Formula Vee racer Charles Hearn, in his No. 37 Noble Racing/Hearn Contractors Volkswagen Vortech, was in command all Sunday on his way to a win.  But that was most certainly not the case the day before.  On Saturday, Hearn found formidable opponents in Mike Landon, driving a Protoform P2, and Chris Jennerjahn behind the wheel of a Vortech.

Around COTA’s 20-turn, 3.41-mile course, the trio of Hearn, Jennerjahn and Landon spent most of Saturday’s race within feet of one another.  Jennerjahn found himself up front for the first third of the event with Hearn and Landon in hot pursuit.  Then it was Hearn who had the lead for the second part of the race, now pressured by Jennerjahn.

“It was all I could do to stay in front of Jennerjahn behind me.  He had more straight-line speed than Speedy Gonzales,” Hearn said after Saturday’s win. “It was a battle for about three or four laps.  But I finally got enough distance on him where I was able to break the draft a little bit.  When that happened, he spun doing all he could to catch me.  It was a blast. Big thanks to the SCCA and all the workers.”

Following Sunday’s action at COTA, the Hoosier Super Tour next heads to Avondale, Louisiana for a weekend of racing March 3-4 at NOLA Motorsports Park located just across the Mississippi River from New Orleans. Follow all the action live at www.scca.com/live.

Photo: Robeson Clay Russell, in the No. 31, swept the Spec Racer Ford Gen3 class at Circuit of the Americas during the Hoosier Super Tour weekend.