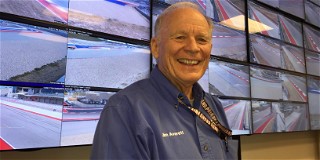 Jim Averett, who has been part of the Sports Car Club of America since 1979, is a former pilot.  During 26 years flying with Delta Airlines, Averett became very, very good at multitasking.  This weekend during the Hoosier Racing Tire SCCA® Super Tour at Circuit of the Americas, Averett is putting that skill to good use as Tower Captain.

While sitting in a large room at COTA with a wall of televisions displaying more than 40 different camera angles of the track, Averett’s task as Tower Captain is to work with the Operating Stewards to make sure each race session is carefully monitored, questions get answers, safety is maintained, Steward decisions are consistent, and things run on schedule.

“Stewarding is a fun thing to do,” Averett noted.  “I travel around the country, go to races, and hang out with racers. But what’s hard about this job is you have to learn to multitask because if you’re in a session and a lot of stuff starts going on, you’ve got to keep track, you have to prioritize and decide what is the most important thing to deal with first.”

Averett, a member of the SCCA’s Lone Star Region, began his Club involvement racing Formula Vees, Sport Renaults and Formula Continentals. In the 1990s, he started to explore stewarding, became a Steward in Training, did some race stewarding, and made stewarding a primary focus when his driving days came to a close.  Since then, he has been an Executive Steward, worked as a Steward of the Meet, was Chief Steward at a couple National Championship Runoffs®, and now helps as a Steward at various pro events.

The reward, as Averett sees it, is the sense of accomplishment that comes at the end of a weekend when an event goes off successfully and everyone has fun either as a driver, volunteer or spectator. Of course, he understands some racers believe Stewards live to make things difficult.  But nothing could be further from the truth.

“We don’t like to have to penalize people, but we have to do it to keep the racing fair,” Averett insisted.

After more than 35 years, Averett still very much enjoys being part of the SCCA community.  Whenever he ponders hanging up his Steward’s lanyard and retiring from motorsports, Averett simply thinks about what the Club has added to his life.

“I’ve made so many friends in the pro ranks and in the Club ranks,” Averett recalls. “Any time I think about stopping, I think, ‘man, all my friends are there and I need to see them.’”

Averett and his friends will be having fun with cars all weekend at Circuit of the Americas in Austin, Texas. Be sure to follow all the Hoosier Super Tour action Saturday and Sunday at www.scca.com/live.

Photo: Jim Averett working the Steward’s room at Circuit of the Americas