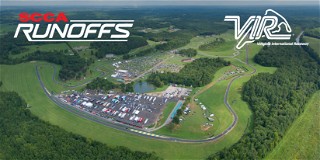 TOPEKA, Kan. (Jan. 24, 2018) -- The Sports Car Club of America® has officially announced the 2019 SCCA® National Championship Runoffs® will be held October 8-13 at beautiful VIRginia International Raceway (VIR) in Alton, Virginia. This will be the very first time the Runoffs has been held at the sprawling venue located near the border of Virginia and North Carolina.

“We’re thrilled to take amateur racing’s most prestigious event to one of the most beautiful and challenging racetracks in the country, returning it to the Eastern United States for the first time since 2015,” said Eric Prill, SCCA Vice President & COO.  “The VIR visit continues SCCA’s current practice of moving the Runoffs to different locations around the country each year.  And with the amazing track, facility and backdrop VIR offers, we’re sure the Runoffs will be a ‘must-attend’ for our entire membership and racing fans alike in 2019, and a fantastic way to cap SCCA’s 75th anniversary year.”

Connie Nyholm, VIR’s Owner and CEO, noted that the track first opened in 1957 as one of the country’s first permanent road racing circuits. Recognizing greatness, the 3.27-mile track -- which will be used for the Runoffs -- has remained exactly the same since, with the only change being widening some places to offer safer run-off room.

“I can't tell you how excited we are to welcome the best amateur drivers in the U.S. for the 56th edition of the Runoffs,” Nyholm said.  “SCCA sanctioned the very first race here, and again in March 2000 when Harvey Siegel and I re-opened the resurrected VIR. Having the 2019 Runoffs will be an important part of VIR's history."

While racing is the heart of VIR, the expansive 1,300-acre property is so much more. America’s first true “motorsport resort,” it’s an entire vacation destination with a number of onsite hotel and lodging options. Within the property’s rolling hills and miles of lush forest, guests can enjoy unique amenities such as the exclusive Driver’s Club, dining options, spa, karting, skid pad, and even shooting sports. Located near Danville and South Boston, Virginia, the circuit is within 45 minutes of 1,500 hotel rooms and 100 restaurants. Contact VIR at lodge@virnow.com or call (434) 822-7700 x101 for lodging assistance.

While the SCCA looks forward to the 56th Runoffs at VIR in 2019, racers are currently qualifying for the 2018 Runoffs being held October 16-21 at Sonoma Raceway in Sonoma, California.  The traditional 12-turn, 2.52-mile course layout will be used for that event.

About the Sports Car Club of America:
The Sports Car Club of America®, Inc., founded in 1944, is a 67,500-member motorsports organization that incorporates all facets of autocross, rally and road racing at both Club and professional levels. With headquarters in Topeka, Kansas, the SCCA annually sanctions over 2,000 events through its 116 Regions and subsidiary divisions. Much of the SCCA's activities are made possible with support from the following Official Partners: Chevrolet, the Official Truck of the SCCA; Hawk Performance, the Official Brake Products of SCCA; Mobil 1, the Official Oil of SCCA; Sunoco, the Official Fuel of SCCA; and Tire Rack, the Official Tire Retailer of SCCA. To learn more, please visit www.scca.com.

About VIRginia International Raceway:
VIRginia International Raceway is one of America's premier road courses, offering professional and amateur racing for modern and vintage classes while providing contemporary resort amenities.  A prominent test facility for the automotive industry, VIR has the distinction of being named one of the top six courses in North America by Car & Driver Magazine, and southern roots and hospitality make it one of the friendliest.  Conveniently located at the Virginia/North Carolina border, VIR is just a short two-hour trip from Richmond and about an hour and 15 minutes from both the Piedmont-Triad and Raleigh-Durham International Airports.