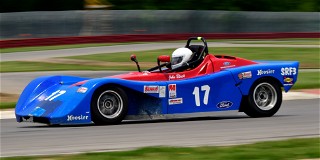 Michael Lavigne opened the afternoon with a win in his No. 42 Auto Re-Nu-It Auto Body Ford Mustang GT. Lavigne had to clear Rob Huffmaster’s Super Touring® Under class-winning and overall polesitting Honda S2000, then hold off the field again following an early caution period. Aaron Kaplan tried to make it a fight with his BMW M3, but Lavigne used the traffic to clear Kaplan again and take a 2.273-second win.

“That was a great race today,” Lavigne said. “Aaron finally made his move and got to me. We had good racing for a few laps and I put some distance on him. It was a real good day for us.”

Typically, with a few exceptions, the cross-country battles are reserved for the season-ending SCCA National Championship Runoffs®. But a gang of talented Spec Racer Ford Gen3 drivers are barnstorming across the country this summer, with stops at Mid-Ohio, Road America and Watkins Glen. By the looks of it, they plan to pillage their East Coast hosts of all of their trophies.

San Francisco Region’s John Black held off Michigan’s Bobby Sak and his West Coast counterpart TJ Acker to stand on top of the podium on Saturday. The trio were battling from flag-to-flag, along with road trip ringleader Mike Miserendino in fourth.

“That was a tough one,” Black said. “It was a real race, all the way to the last lap. We were two-wide there for a while. It was a heck of a race. We thought we’d come back and hit some really good tracks. We’ve been talking about it for a couple of years, and I guess it worked out!”

“The track was real quick for the first five or six laps,” Ruck said. “I had a good race with Breton right at the start. It was a pretty big field with a huge speed disparity, so the second half of the race was a lot of where are you going to put your car and being predictable. That became the name of the game.”

Jim Drago held off a charging Brian Henderson in Spec Miata, with Jared Thomas and Jonathan Davis completing the top-four in a nose to tail battle. Drago started on pole and took care of business in the No. 2 East Street Racing Mazda Miata by 0.326-second over 12th starting Henderson. The race included a duel with Thomas, with hard racing and side-to-side contact on more than one occasion.

Daniel Richardson ran his “toughest race ever” in a battle with Steven Ott on his way to an American Sedan® win in the No. 5 Gentium Tech/Hoosier Chevrolet Camaro. Richardson was Ott’s driver coach when he got started five years ago, and the pair have maintained a tight friendship.

“There was a spin on the start and everyone went every direction they could,” Richardson said. “Steve got by me. He was flying and I got really lucky with some traffic. I got by him on the back straight and we raced nose to tail the entire race. Side by side, door to door, nonstop. We got by Andy McDermid at the end. It was the best race I’ve ever had in American Sedan.”

Saturday concluded with a participant party at Mid-Ohio’s Honda Pavilion, where volunteers, friends, drivers, crew and family ducked under the picnic shelter for food, drinks and door prizes. On Sunday, racing begins again at 8:40 a.m. ET with 21-lap or 35-minute races. Follow all the action live at www.scca.com/live.