Back to Indianapolis Motor Speedway for 2021 Runoffs 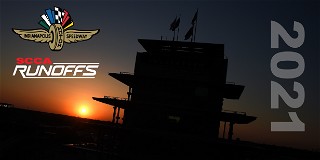 INDIANAPOLIS (May 25, 2019) – Indianapolis Motor Speedway (IMS) and Sports Car Club of America® (SCCA®) announced today that the annual SCCA National Championship Runoffs® will return to the road course at IMS Sept. 25-Oct. 3, 2021, for the 58th running of the unique championship motorsport event.

Mike Cobb, SCCA President/CEO, said this will be only the second time in Runoffs history that the event has been staged at IMS. The first visit occurred in 2017 and was a massive success for both IMS and SCCA.

“Back in 2017, we felt pretty sure the Runoffs at Indianapolis Motor Speedway would be a ‘hit’ with SCCA road racing competitors, but that event exceeded even our wildest dreams,” Cobb said. “It was the largest event in Runoffs history, with 969 entries, and produced both great racing and great memories. The community welcomed us with open arms, and it was just an absolutely wonderful experience for our Club. We simply couldn’t wait to return to that legendary facility, and I’m confident our return in 2021 will be just as exhilarating for all involved.”

J. Douglas Boles, president of Indianapolis Motor Speedway and a former SCCA competitor, noted that the histories of IMS and SCCA are intrinsically linked. Many SCCA racers have gone on to compete at the Indy 500, with Mark Donohue and Bobby Rahal currently the only drivers to earn both a Runoffs title and Indy 500 win during their careers.

“There are many drivers, owners and crew who started in SCCA competition and later went on to compete at the Indianapolis 500 over the years,” Boles said. “Hosting the SCCA National Championship at Indianapolis Motor Speedway remains a natural fit for both organizations and offers those actively involved in motorsports the opportunity to compete at the Racing Capital of the World.”

While the SCCA looks forward to the 58th Runoffs at IMS in 2021, SCCA Vice President/COO Eric Prill said racers are currently qualifying for the 2019 Runoffs being held for the first time ever at VIRginia International Raceway Oct. 8-13 in Alton, Virginia; followed by the 2020 Runoffs to be conducted at Road America in Elkhart Lake, Wisconsin. However, today’s announcement about returning to IMS will certainly create a great deal of excitement within SCCA’s racing community.

“For many of us involved in motorsports today, Indianapolis Motor Speedway and the Indy 500 were the spark that ignited our dreams and passion at a young age,” said Prill, who also won the 2017 F Production SCCA National Championship race at Indianapolis. “Just the opportunity to drive a race car around this hallowed facility in the tire tracks of our heroes is something that many of us spent our lives dreaming about. And to be able to do it at an iconic and unique event like the Runoffs -- where a year, or in some cases a lifetime’s effort culminates with the checkered flag while crossing the Yard of Bricks -- is a magical combination.”

In 2014, the Runoffs began an annual rotation, moving around the country with the goal of hitting “bucket list” tracks. Deanna Flanagan, SCCA’s Director of Road Racing, said that goal has been achieved as the last several years have seen the Runoffs make appearances at world-class facilities throughout the United States.

“Before 2014, SCCA would conduct its Runoffs at the same venue for multiple years in a row,” Flanagan said. “That was the case starting back in the 1970s with what is now Michelin Raceway Road Atlanta and continued at Mid-Ohio Sports Car Course, Heartland Motorsports Park and Road America. Since beginning the annual rotation, the Runoffs has also made stops at other historic tracks, including WeatherTech Raceway Laguna Seca, Daytona International Speedway, Sonoma Raceway and a trip to VIRginia International Raceway this October. Conducting the Runoffs at a new venue each year presents logistical challenges, but the track staff and community around IMS were wonderful to work with previously, and I’m confident the next Runoffs at the Speedway in two years will be just as memorable and meaningful as the first.”