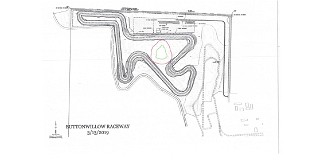 While more than 40 configurations are plenty, Buttonwillow is moving ahead with plans to create ANOTHER 2.579-mile race course at the northern end of the property. According to Buttonwillow Raceway Park President Les Phillips, the new layout will meet all the highest FIA track-specific standards and be completed within the next year.

“The new layout’s front straight through the first turn is 50-feet wide, and all of the remaining length is 40 feet in width,” Phillips notes. “Our native ground is near flat, so we’ll build three hills of varied elevation change for additional interest. Also, the new track could very well be the most ‘green’ circuit ever built in the U.S. as nearly all products used will be recycled, and that includes the rubberized asphalt which offers superior grip and is a lot easier on tires.”

A barely noticeable but added feature of interest for the newest portion of Buttonwillow will be the Giant Kangaroo Rat preserve positioned in the layout’s very center. Some years ago, a Giant Kangaroo Rat was found on the property. As an endangered animal, habitat must be left for the critter.

“State and Federal entities have required Buttonwillow’s new layout to conserve space for the ancestral ground of the Giant Kangaroo Rat. As such, we’ve now got a track designed for both rats and Track Rats,” Phillips joked.

Penelope Coy, Cal Club’s Regional Executive, said that as Cal Club approaches its 70th Anniversary in 2020, the Region simply wouldn’t be the success it is today without Buttonwillow.

“Many thanks are owed to the previous members who had the foresight to purchase the land and build Buttonwillow after the demise of Riverside, which Cal Club considered its home track,” Coy said. “Buttonwillow has become more of a ‘home’ for our members and a track of which we are very proud. Cal Club looks forward to the completion of the second track which will also have a small museum collection from one of our members, plus other amenities housed in a new tower building.”

While Buttonwillow’s next great evolution sits just on the horizon, the venue and Cal Club’s focus this weekend is the Hoosier Racing Tire SCCA Super Tour. Be sure to follow all the action all weekend with live timing/scoring, static cameras and Super Tour Radio presented by Hoosier Racing Tire at www.scca.com/live.