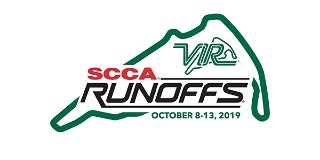 The same 28 classes that made up the 2018 Runoffs, held in October at Sonoma Raceway, will compete at the 2019 event. New regulations announced in May guaranteed places in the preeminent SCCA event for classes reaching a certain level of entries over the past two seasons, with additional classes being included based on venue space and event format.

Per SCCA General Competition Rules section 3.7.4.C (Invited Classes), “The Road Racing department, in consultation with the Club Racing Board, will determine and announce by January 1 the Runoffs-eligible classes invited to the next Runoffs consistent with the event format and venue.”

“Based on initial surveys, we expect a strong car count for the Runoffs at VIR,” SCCA Director of Road Racing Deanna Flanagan said. “We will plan the event based on the same 28 classes from 2018, with the understanding that grouping classes together for qualifying and races will continue to be necessary.”

Five classes (Formula 500, Formula 1000, Formula Atlantic, Formula Enterprises 2 and GT-1) will be on probation for the 2019 Runoffs because they were below 10 cars at the 2018 event. If they do not have a minimum of 10 participants at the 2019 event, the class will run as a supplemental race, but no National Champion will be named.

About the Sports Car Club of America:
The Sports Car Club of America®, Inc., founded in 1944, is a 67,500-member motorsports organization that incorporates all facets of autocross, rally and road racing at both Club and professional levels. With headquarters in Topeka, Kansas, the SCCA annually sanctions over 2,000 events through its 116 Regions and subsidiary divisions. Much of the SCCA's activities are made possible with support from the following Official Partners: Chevrolet, the Official Truck of the SCCA; Hawk Performance, the Official Brake Products of SCCA; Mobil 1, the Official Oil of SCCA; Sunoco, the Official Fuel of SCCA; and Tire Rack, the Official Tire Retailer of SCCA. To learn more, please visit www.scca.com.