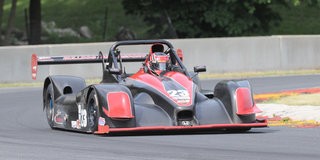 ELKHART LAKE, Wis. (June 16, 2018) – The 63rd consecutive running of the WeatherTech Chicago Region June Sprints at Road America, part of the 2018 Hoosier Racing Tire SCCA® Super Tour, began Saturday with eight different race groups taking to the historic track. Action on the 4.048-mile, 14-turn circuit produced a lot of excitement for spectators, and 28 class winners were lauded by the end of racing on day one.

Saturday’s 25-minute races produced a few surprise endings.  Take, for instance, the Touring 2 (T2) class that was part of the day’s first race group.  Aaron Kaplan, in his BMW M3, stepped out to an early lead, was ahead of the field by several seconds, and looked as if he had a T2 victory in the bag.  He was first to take the white flag to begin the final lap, but it was Jack Kachadurian, in the No. 85 Fall-Line/The Kachadurian Group Porsche 996 Carrera, who was first to reach the finish line for victory.

“Didn’t have a great qualifying session, just didn’t have the car together,” Kachadurian admitted after the win. “Qualified seventh, bided our time, picked guys off one at a time, and then I was trying to run down Aaron Kaplan at the end of the race.

“I’m not sure exactly what happened to Aaron,” Kachadurian continued, “but he slowed up at The Kink and I was able to get by.  You just got to keep pushing, keep the car dialed, don’t try to over-drive it, and you never know what can happen.”

A similar occurrence took place later in the day during the Prototype 1 (P1) race.  There, Jason Miller moved to the lead at the start and was showing good pace in his WynnFurst racecar. Meanwhile, Jim Devenport opened the race back in third, moved to second about midway through the event, and then began to close the gap to Miller.  The last lap began with Miller holding the top spot, but end with Devenport, in his No. 23 Cranbrook Group Norma M20FC, taking the checkered flag first for the win.

“I could see I was catching Jason a little bit, and I know his car is a little on the ‘fragile’ side,” Devenport said just before heading to the victory podium. “Going down into Canada Corner, sure enough he blew up. I feel bad for him, he ran a good race and was clearly the fastest car.  But we ended up with a win and it’s a gratifying victory.”

On any given Hoosier Super Tour weekend, the Formula Vee (FV) race can end with a surprise. The drivers are so talented and cars so evenly matched that the class frequently produces some very exciting races. Saturday at Road America was no exception as Andrew Whitston took the lead at the start, but was hounded the entire race by six-time Runoffs® Champion Michael Varacins.  With only a couple laps remaining, Varacins moved his Speed Sport AM-5 to the front past Whitston and had the lead when the white flag soared.  But it was Whitston, in the No. 12 Rocket Motors/Subway/Hoosier Protoform P2, who got to the finish line first -- .007-seconds ahead of Varacins.

“Me and Mike were nose-to-tail the whole time,” Whitston said about the race. “We were just stuck to each other, so I planned out a strategy. Last lap, I was in second coming to the end and I knew that was the place to be. I got him right at the line. That’s how Road America races. You definitely want to be coming out of turn 14 in second place if you’re in a Formula Vee.”

Saturday ended with BBQ pork and chicken at the All Participant party, and a ride in the two-seater IndyCar was given away. Also, June Sprints Grand Marshal Peter Cunningham, a member of the SCCA Hall of Fame, shared a story about the first time he raced at the June Sprints, which had a rocky ending. This year’s competitors will try to avoid a similar fate when racing resumes from Road America Sunday at 9 a.m. Central Time for a second day of WeatherTech Chicago Region June Sprints competition. Follow all the action live at www.scca.com/live.