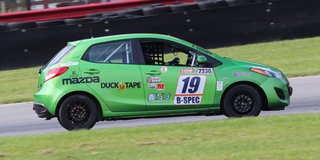 The fourth race group, consisting of Formula and Prototype cars with open cockpits, went out on the circuit with slick race tires.  That wasn’t an issue -- until about 15 laps into the race when the skies opened up and drenched the racing surface.  Racecars began spinning off the track everywhere, and a couple cars had contact.  Stewards decided to bring the race to a close at that point, which made for a surprise winner in the new Formula Enterprises 2 (FE2) class.

Liam Snyder held the lead throughout the FE2 race, followed by Rhett Barkau.  But shortly after the rain started, Snyder and Barkau both spun off track.  That gifted the lead and win to Max Grau in his No. 35 Elite Autosport SCCA FE2 Mazda racecar, his first Hoosier Super Tour win in the class.

“That last lap was just chaos. People were going off left and right,” Grau said. “The only way I won is I stayed on the track, which is good enough for me!”

The rain subsided nearly as quickly as it began, but it left a moist track surface for the next race group, which consisted of heavy Grand Touring cars, as well as the Touring 1 and American Sedan (AS) classes. Those drivers gingerly tiptoed cars around the circuit for the first several laps until a dry line emerged.  In AS, John Heinricy was bold from the beginning in his Chevrolet Camaro and established a good lead on Andrew McDermid in his No. 23 WeatherTech/Felice Performance/Lane Automotive/T&A Shocks/Pro System Brakes Ford Mustang.  But McDermid slowly reeled in Heinricy as the race went on and grabbed the lead about halfway through the event and never relinquished the top spot.

“It was pretty nasty for a few laps. People probably saw me sliding around like crazy,” McDermid said. “But for the most part, it was great.  The car worked like a champ. I really enjoy driving in the rain.”

Heinricy took another shot at winning a race Sunday during the Touring 4 (T4) event that took place later in the afternoon on a dry track. There, the multi-time Runoffs® champion drove his Ford Mustang to the front early.  But T4 competitor Gresham Wagner, in the No. 105 Sick Sideways Racing/Mazda Motorsports/GreshamWagner.com Mazda MX-5, kept his focus and passed Heinricy for the lead midway through the race.  A fantastic battle then took place for the next dozen laps as Heinricy really pressured the younger Wagner.  But in the end, Wagner held his position and came home a winner -- making it a T4 sweep on the weekend.

“It was a tough race for sure,” Wagner said. “In the middle part of the race, we got a break from traffic and I got an opportunity to get around John. From there, he was all over me the rest of the race. He definitely gave me a challenge. It ended up being a really good race.”

Another racer who had to work hard to sweep the weekend was B-Spec driver Tom Coury. On Saturday and Sunday, fellow B-Spec competitor Tony Roma jumped to the lead in his Chevrolet Sonic. But Coury came back in both races to take the lead in his No. 19 Burning River Racing/Duck Brand Tapes Mazda2 racecar. However, Roma charged back to keep pressure on Coury for a bit both days.  The end result was very exciting B-Spec racing all weekend for spectators at Mid-Ohio.

“Multi-class racing and traffic makes things really interesting,” Coury noted after Sunday’s race. “B-Spec is one of the most fun classes to race. I have a blast in this car, hitting two wheels and going all over the place.  It’s just a blast.”

Racers now have one weekend off before the June 15-17 Chicago Region WeatherTech June Sprints at Road America, part of the 2018 Hoosier Racing Tire SCCA Super Tour. Follow all the action live at www.scca.com/live.