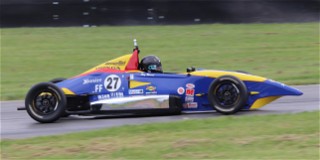 LEXINGTON, Ohio (June 2, 2018) – June will be busy for the Hoosier Racing Tire SCCA® Super Tour with three race weekends on the calendar to close out the 2018 regular season.  To get the month going, competitors took to Mid-Ohio Sports Car Course Saturday for the first of two days of racing organized by SCCA’s Ohio Valley Region.

This weekend, the Hoosier Super Tour is utilizing Mid-Ohio’s “Club Course” that is 2.4 miles long with 15 turns.  On Saturday, however, it was Turn 7, located at the end of the long backstretch, which played a pivotal role in several of the 25-minute races, starting first with the Formula F event. There, Jeremy Grenier jumped out to an early lead in his Citation and was able to maintain a small gap on the Van Diemen RF99 of Ray Rivard.  But with about five laps left in the race, some sort of fluid found its way onto the track at Turn 7, and excitement ensued. Grenier spun at the corner and slid off course. Rivard, however, kept his No. 27 HIPPI Racing machine on the track and went on to claim victory.

‘I’m not sure if it was coolant or oil or something, but I got pretty sideways myself,” Rivard said about the slippery conditions. “But I had the advantage of seeing the guys go off in front of me, so I was able to adjust my line a little bit and make it work.”

Turn 7 remained an important focal point in the very next race, which featured a field of 30 Spec Racer Ford Gen3 drivers. Early in that race, drivers Bobby Sak and John Black set off and created a gap back to the rest of the field.  Sak held the lead for the first half of the race, but the second portion of the event featured a lead change nearly every lap, with Turn 7 being the spot where the position was swapped on multiple occasions. On the last lap, Black held the advantage with what would be considered the “preferred” line at Turn 7, but Sak made his car stick on the outside of the corner.  The two were then pretty much side by side through the next couple turns.  But from there, Sak was able to scoot into the lead and claimed victory a few corners later in his No. 19 Elite Autosport/Revolution10 Breaks racecar.

“For about the last four or five laps, we were trading the lead back and forth most of the time,” Sak said afterwards. “It was a great race.  John and I have been friends for a long time and it’s so much fun racing with him.”

Spec Miata drama also emerged at Turn 7 on Saturday.  After a few opening laps, Michael Carter situated himself at the front of the 34-car field, but he was being hounded by Michael Gagliardo.  As laps dwindled, Gagliardo pushed hard to find a way past Carter.  On the last lap, and in Turn 7, Carter and Gagliardo made contact, resulting in both drivers leaving the racing surface.  Jason Knuteson calmly drove by in his No. 92 Roger Knuteson Racing Mazda Miata to take the lead and victory.

“I could see it was going to happen,” Knuteson said about the contact between Carter and Gagliardo. “I didn’t have quite enough to stay right next to them. But if I had been right on their bumpers, I would’ve been collected.  So, I just laid back and waited for it to happen.”

Even though competition got heated during the day; food, friends and fun could still be found Saturday night at the All Participant party.  But SCCA competitors will be hunting again for wins starting Sunday morning at Mid-Ohio Sports Car Course with 35-minute or 21-lap races throughout the day. Follow all the action live at www.scca.com/live.