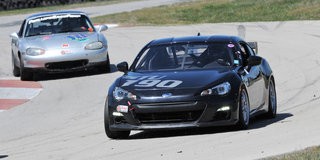 JENNINGS, Okla. (April 7, 2018) – The word “invigorating” applied to both the weather and racing Saturday during the opening day of Hoosier Racing Tire SCCA® Super Tour competition at Hallett Motor Racing Circuit, a race weekend hosted by the SCCA’s Ark Valley Race Group.  Morning qualifying was greeted by chilly temperatures hovering in the 20-degree range. But things managed to warm up a bit as racing started in the early afternoon.

“A race ain’t over ‘til it’s over,” was the theme that emerged during the first day of competition on the 1.8-mile, 10-turn road racing course in Jennings, Oklahoma. That principle developed early in the Super Touring® Under class when Billy Roberts jumped to the front in a Mazda MX5 and established a commanding lead.  But David Fiorelli, who started at the rear of the field in his No. 190 Subaru BRZ, ended up having something to say about the end result.  With only three laps remaining in the event, Fiorelli managed to pass Roberts for the top spot.

“I really had to push hard. It was just pedal to the metal,” Fiorelli said about the effort that ultimately netted him the STU win. “I have a lot of laps around Hallett, so that helps quite a bit.”

Another driver with a lot of laps around Hallett Motor Racing Circuit is Grayson Strathman, the Spec Racer Ford Gen3 driver.  Surprising nobody, Strathman pulled out to a lead of four seconds early and maintained that gap most of the race with challengers Richard Stephens and Gary Glanger giving chase.  But as the race drew toward its completion, the lead gap had dropped to two seconds.  Then with only a couple laps to go, Stephens in his No. 56 Dalrymple Racing Services SRF3 moved in for the kill, got around Strathman, then fought hard to get to the finish line first.

“I started fifth because I didn’t qualify real well,” Stephens noted after the victory.  “But my car started to come around and Grayson seemed to be fading.  I chased Grayson down and we passed each other a couple times.  It was a great race.  A really good time.”

For Strathman, claiming the runner-up spot brought no sorrow.

“Those last few laps were some of the best racing I’ve ever had. We were back-n-forth, side-by-side,” Strathman said. “My heart is definitely pumping.  That was exciting.”

American Sedan® competitors also tried to keep to the day’s theme. Kim McDonald, in a Chevrolet Camaro, moved to the front early only to be passed by seasoned driver Jim Wheeler five laps into the race.  Wheeler held station at the front for a while, building a lead of at least three seconds. But Kevin Fandozzi, driving a Chevrolet Camaro Z28, began to zero in on Wheeler.  Things got tight for a while, with Wheeler dropping a few tires into the dust at a couple corners, but he managed to hold on in his No. 20 Hoosier/Wilwood/K.C. Raceware Pontiac Trans Am.

“I was driving as hard as I could drive the whole race with McDonald right on my tail,” Wheeler said. “Next thing I know, Kevin Fandozzi is there dicing with McDonald. It was great fun. It was awesome.”

Saturday concluded with an all-participant party that featured delicious, carved roast beef and plenty of desserts. Come Sunday morning, drivers will burn off those calories when competition resumes at Hallett Motor Racing Circuit with another set of races, each lasting no more than 35 minutes. Follow all the action live at www.scca.com/live.

Photo: David Fiorelli found his way to victory Saturday in the Super Touring® Under class during the Hoosier Super Tour’s opening day at Hallett Motor Racing Circuit in Oklahoma.