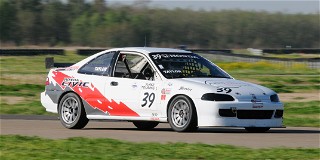 In Super Touring Lite, more than a dozen drivers were led to the green flag by Danny Steyn in his colorful Mazda MX-5.  Steyn quickly established a solid gap on the field, but pulled into the pits midway through the race with some sort of issue.  Left to battle for victory were Amy Mills, piloting a Mazda Miata, and Mike Taylor in the No. 39 Just Track It/Hong North Racing Honda Civic.  Things got intense for Taylor as the duo worked through traffic.

“I went for my brakes and they weren’t there. I had a big panic, my elbows all over the place, and Amy managed to get by me,” Taylor recalled. “I managed to get by her again and hold her off.  So, it was pretty cool.”

While Taylor and Mills were doing battle, Touring 2 competitors were also duking it out on the 2.75-mile, 16-turn circuit. Jay Pellegrini, in a Nissan 350Z, had the T2 pole and took the early lead.  Bill Collins, who had never before raced at NOLA Motorsports Park, fell behind Pellegrini by nearly 12 seconds.  However, Collins’ No. 63 Interstate Truck Driving School Chevrolet Corvette came into its own midway through the race, and he closed the gap to Pellegrini.  The two fought hard, with the margin of victory finally being less than half a second.

“I got by him once, and he got back by me in some really clean racing,” Collins noted after the challenge.  “As luck had it, I was able to nip him at the line.”

The GT-2 race later in the afternoon also had some intrigue.  At the start, Ben Hocevar and his Chevrolet Corvette moved to the front, followed by his father, Alexis, in a Howe Camaro.  But Ben pulled into the pits after a handful of laps, and Alexis was passed by Don McMillon in his No. 51 Salasko Racing Chevrolet Corvette.  Alexis gave chase but spun, and McMillon thundered away to victory.

“We had a really good race and swapped the lead several times,” McMillon said.  “I just held on.”

There were plenty of great SCCA Club moments Saturday at NOLA Motorsports Park, but a special one came from Danny Steyn.  Yes, he had a less-than-optimal Super Touring Lite outing earlier in the day.  However, he came back strong later to claim the Spec Miata victory in his No. 39 Adept Studios/Rossini Engines/OPM Autosports/G-LOC Brakes Mazda Miata.

“Exactly a week ago, I turned 60 years old,” Steyn pointed out. “I’ve had this goal for a long time that I wanted to win a U.S. Majors or Hoosier Super Tour Spec Miata race at the age of sixty.  And one week into 60, I pulled it off.  So, I’m really thrilled I could make this happen.”

Saturday came to a close with a meal that included hot wings that made tongues sing, and a fantastic array of desserts. But competition resumes Sunday at NOLA Motorsports Park with racing slated to begin at 10:55 a.m. local time with 35-minute events throughout the day. Follow all the action live at www.scca.com/live.