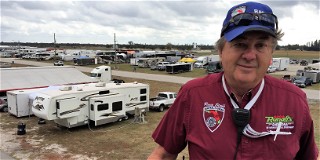 Anyone who has raced a Sports Car Club of America® event at Sebring International Raceway in the last decade probably knows Charlie Leonard.  The 21-year member of SCCA® and the Central Florida Region is a fixture at the circuit because of his fabulous work as Paddock Marshal where he manages the expansive space and keeps people safe. In fact, the retired policeman has gotten so good at his specialty that many national championship competitors are familiar with his work as Runoffs® Paddock Marshal for the last three years.

“It’s a rewarding thing at the end of the day when you’ve parked a couple hundred rigs,” Leonard said. “Drivers and crew are always really appreciative, and that’s nice to get that kind of feedback.  It’s nice to know you’ve helped someone and they appreciate it."

Leonard’s love of motorsports began in the 1970s when he’d show up at Sebring International Raceway for the famous 12-hour events.  But it took almost another 20 years before he realized he could be more than a spectator.

“I didn’t know there was anything such as club racing,” Leonard admitted. “Road racing was always of interest to me. I would’ve gotten involved in the ‘70s if I had any idea there was club racing. I thought it was all pro racing.”

Like so many others, Leonard began his involvement crewing for another driver.  Then he got his competition license, spent some time behind the steering wheel of Improved Touring cars, and now competes in GT-Lite in the No. 14 JB Racing/Hoosier Tire/Appalachian Tire Nissan 200SX, as well as fulfilling his Paddock Marshal duties.

“I started working in the paddock as a way to give back to the Club,” Leonard noted. “Central Florida is a big Region with a lot of cars at our events and two really great tracks.  There’s a lot of complexity in making sure people park correctly in the paddock. But it’s a lot of fun, and you get to meet a lot of great people and talk to them all day long.”

“This is a family-oriented Club and group. It’s a great environment to raise children,” Leonard stated. “And if you are going to come out to work, you can be a flagger, you can be in timing and scoring, you can help with registration and everyone always appreciates what you’re doing.”

“I wouldn’t be involved in racing still if it wasn’t for the comradery and the friendships,” Leonard said in conclusion. “My best friends now, and for the last number of years, are people in the Club.  That’s the people I socialize with and have constant contact with, people in the Club.”

We all look forward to seeing Leonard this fall at Sonoma Raceway for the 2018 National Championship Runoffs.  But before then, be sure to follow all the Hoosier Super Tour action Saturday and Sunday from Sebring International Raceway at www.scca.com/live.