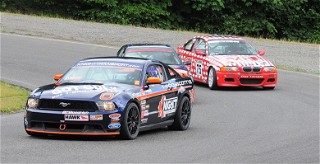 Storylines/Things to Watch:
The Great Northwest -- The Hoosier Racing Tire SCCA® Super Tour will make its only visit to the Northwest May 19-21 at Portland International Raceway. More than 100 racers are expected to tackle the 1.977-mile, 12-turn circuit utilizing the chicane this weekend. Plus, it looks to be absolutely wonderful conditions with temperatures sitting in the low- to mid-70s and just the smallest chance of rain.

A Saturday Switch -- This weekend’s Hoosier Super Tour features seven race groups. While most Hoosier Super Tour weekends include two races for each group, one on Saturday and one on Sunday, a slightly different schedule will be used at PIR. Group 1, which includes Formula Mazda and Formula Atlantic drivers, will actually have both races Saturday -- a 25-minute race starting at 11 a.m. followed by a 35-minute race at the end of the day. Should put both drivers and machines to the test, and will be something to keep an eye on during the opening day of competition.

Last Leg Out West – Racing this weekend at PIR represents the third and final Hoosier Super Tour event of the year out west. The first event took place back in March at Willow Springs International Raceway in Southern California, followed by a second weekend in April at Buttonwillow Raceway Park in California’s Central Valley. For some drivers, PIR will be their last shot to generate points for the Hoosier SCCA Super Tour Point Championship before the 2017 SCCA® National Championship Runoffs® being held this year at Indianapolis Motor Speedway.

Did You Know – A stone’s throw from downtown Portland, and sitting right along the border of Oregon and Washington, Portland International Raceway was developed around the remains of a housing community destroyed in 1948 by a disastrous flood. But the local Portland Jaycees saw potential in the abandoned roads left behind and created a road course that, in 1960, held its first race. And incidentally, the venue has served as the backdrop for movies and television shows filmed in the area.