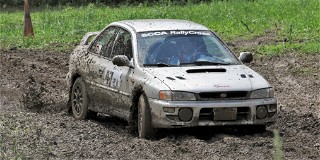 Watkins Glen, N.Y. (Aug. 16, 2018) -- The 2018 DirtFish SCCA® Finger Lakes RallyCross® National Challenge at Watkins Glen International highlighted the powerful draw of RallyCross competition. Racers from as far away as Colorado, Texas and Arizona battled with talented drivers from every corner of the Northeast. The result was a weekend of dirty, sideways racing for national RallyCross bragging rights.

Saturday morning had some unexpected rain, but it didn’t stop this determined group. While the wet conditions slowed some drivers, others found enough grip to excel and finish well. After a couple brief delays and course changes during the morning run groups, the afternoon saw sunshine and quick conditions. By the end of the weekend, everybody had their full slate of runs and the racing turned out to be equal parts competitive and entertaining.

Stock FWD turned out to be an incredibly tight battle with just 22 seconds separating the top five finishers. Chang Ho Kim and Kim Hapgood co-drove their Honda Del Sol to first and third, respectively. James Coulombe was the Civic meat in this all-Honda sandwich, a mere 1.9 seconds behind Kim and just 4.4 seconds in front of Hapgood. Stuart Rotblat was 5.1 seconds further back in his VW Golf and Collin Oelkers rounded out the top five 11.4 seconds back in his Ford Focus.

Prepared FWD was a tale of two tight races with first and second places the better part of a minute ahead of the remainder of the competition. Jake Buckman and John Seaton were the class of the field with Buckman taking first in his Mini Cooper by 7.1 seconds over Seaton in his Fiesta. Chris Murphy was 47 seconds back in third in another Fiesta. Fourth and fifth closely trailed with Rich Smith 3.9 seconds back in a Civic and Alex Ashbaugh another 1.8 behind in a Dodge Neon.

Modified FWD was a similar story with the first three spots 47 seconds in front of the rest of the field. Scott Carlson and Philip LaMoreaux co-drove a VW Golf with Carlson taking first over LaMoreaux by 15.5 seconds. Another 16 seconds back in third was Adam George in a Hyundai Accent. Andy Thomas and his Celica took home fourth with stage rally veteran Tony Zanni claiming fifth in another Golf.

Prepared RWD was a battle of roadsters and a truck. Myles Goertz and Kyle Nilson co-drove a 1999 Mazda Miata with Goertz taking first by 6.0 seconds. Another Miata was co-driven to third by Shawn Roberts and fourth by Katie Orgler. Bradley Whiteside took home fifth in a Chevy S10.

Modified RWD had more makes, though Brianne Corn did clean up in another Miata by taking first place by 8.8 seconds. Vaughn Micciche took second in a Porsche 924 S and Peter Dozeman came all the way from Phoenix Arizona to take third in another Mazda. In fourth to seventh places were a Toyota MR2, Volvo 240, Ford Mustang and BMW 318is.

Prepared AWD was mostly a Subaru field with one Evo and a Nissan 370. Clifton Kangas left everybody else scratching their heads as he and his 2000 2.5 RS finished 81 seconds in front of second place Keith Pizio in his 1999 Impreza. Harold Denham piloted the sole Mitsubishi to third, just 4.3 seconds back.

Modified AWD was another scrum of mostly Subarus, but first place went to Warren Elliott in a 2006 Evo IX. In second was Emmanuel Cecchet 17.7 seconds back in a 2004 STI. Second to fifth was an incredibly tight battle separated by just six seconds. Radim Hlidek took third in his STI wagon, just 3.9 seconds behind Cecchet. Margaret Sharron was a mere 1.8 seconds behind him in fourth in another 2004 STI. Richard Ottman finished fifth just 0.1 seconds behind in a 2001 Impreza.

With help from a long list of RallyCross enthusiasts from throughout the Northeast, the Finger Lakes Region hosts rolled with the weather punches and delivered a great weekend of racing in the scenic Finger Lakes region of New York.