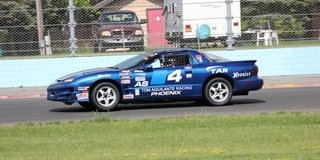 There were a few other tight class battles during the Northeast Conference season.  In Touring 1, Chris Durbin drove his Ford Boss 302R to six wins, 168 points and the conference championship, besting Hugh Stewart, in a BMW M3, by only three points.  The Touring 2 group put on a show, too, with Kurt Rezzetano besting Michael Lavigne by only four points for the conference championship.  Rezzetano managed seven wins as compared to six wins claimed by Lavigne, with both driving Ford Mustang GTs.

Six points was the margin of victory for Prototype 1 driver Bryan Putt, in an Elan DP02, to claim the conference championship over Greg Bell’s Carbair CS-2.  And six points was the difference between H Production racers Stephanie Funk and Jack Banha.  Funk, with 138 points, took the championship driving a Honda CRX over Banha’s Volkswagen Cabriolet.

The conference began its racing season in April with Round One and Round Two at VIRginia International Raceway during a Hoosier Racing Tire SCCA Super Tour weekend. Summit Point Motorsports Park in West Virginia was next, followed by a weekend at Pittsburgh International Race Complex in Pennsylvania.  The Northeast Conference then conducted Round Seven and Round Eight in Pennsylvania at Pocono Raceway before another fantastic Hoosier Super Tour weekend at Watkins Glen International in New York during June.  July events at Thompson Speedway Motorsports Park, in Connecticut, and New Jersey Motorsports Park then wrapped up the season.