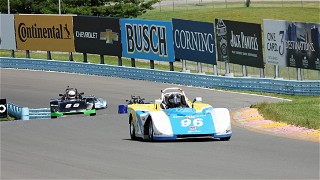 Watkins Glen, NY (June 25, 2017) – Racing Sunday at Watkins Glen International in Upstate New York closed out the 2017 Hoosier Racing Tire SCCA® Super Tour. And in what has been a constant throughout the 11-event schedule, the season came to an end with absolutely fantastic competition.

The Spec Racer Ford field was small this weekend, but they put on a mighty, mighty good race Sunday.  Jim Tibor took the early lead and was looking strong.  However, a full-course yellow bunched up the field after the second lap in the 35-minute race.  On the restart, Tibor was intent on pulling away.

“It looked like I had a pretty good gap on the restart,” Tibor said.  “I wanted to maintain that gap and maybe make it a little bigger because I wasn’t happy with what I had. But I spun out in Turn Seven and ended up taking myself out.”

With Tibor out of the picture, Bernard Grogan and Frank Vultaggio began an incredible battle at the front, with Chris Pluta shadowing right behind. Grogan held the top spot most of the time, but Vultaggio hounded him and even took the lead away at certain points.

“We were running close again, just like yesterday,” Vultaggio said.  “We were nose-to-tail almost the whole time, lap after lap after lap.”

On the last lap, Vultaggio took another stab at the lead.  He and Grogan went side-by-side through portions of the track.  The duo exited the final corner, and a road race became a drag race to the finish line.  The margin of victory was less than .02 seconds, and the win went to Grogan in his No. 96 Elite Autosport SCCA Enterprises Spec Racer Ford.

“Frank got me going into the Bus Stop on the last lap,” Grogan said. “I tried to stay on him as much as I could coming through Turn 10 and 11, and tried to keep up my momentum.  Thankfully, I had enough momentum to inch him out in the end. It was just a spectacular race. I was racing with two very fast, clean drivers.”

For those who follow the Spec Miata class, here is a statement that hasn’t been made in a while: Danny Steyn, in his No. 39 Adept/Rossini/OPM/G-Loc/TraqGear/TraqMate Mazda Miata, has won!

“Finally! Tick, tock; the clock has stopped,” exclaimed Steyn after the race.  “It’s been well over a year, I hate to say, since I’ve won a Spec Miata U.S. Majors Tour race.  This brings that to a rest!”

The win, however, was anything but easy.  Tyler Kicera, Saturday’s SM winner, jumped out to the lead early and could be found there almost the entire race.  Steyn spent most of the event tucked in behind Kicera, only leading for two laps -- the important one being the last.

“I thought I had more tires left at the end of the race than Tyler,” Steyn explained. “He seemed to be struggling a little bit compared to me, and I just seemed to be able to roll more speed through the turns.  But Tyler is a fine gentleman.  He raced me clean everywhere.”

Kicera noted afterwards that both he and Steyn had incredibly equal cars throughout the event.  What Kicera did to win on Saturday, he believes Steyn duplicated to take the victory on Sunday.

“I had him in some corners, he had me in other corners,” Kicera said.  “I tried really hard on the last lap today to do everything I could.  I was really close to wrecking on every corner.  But it wasn’t enough in the end, and congratulations to Danny.”

In Super Touring® Lite, Eric Kutil and his No. 82 Carbotech/Hasport/Auto Assets/Gridlife/Honda Racing/HPD/OS Giken Honda Civic Si were riding a five-race winning streak that began back at the Mid-Ohio Hoosier Super Tour event, carried through the June Sprints, and continued Saturday at Watkins Glen.  In Saturday’s race, Kutil started back in the pack and slowly fought his way to the front for a victory.  On Sunday, Kutil was positioned on pole in a race that started just after the skies opened up and moistened the track.

The wet conditions suited Kutil and he took off to a solid, early lead with Brian Shanfeld’s Honda Civic Si and the Mazda MX-5 of Craig McHaffie a short distance behind.  But about halfway through the race, the track began to dry.  That change allowed Shanfeld and McHaffie to reel in Kutil.  In the closing laps of the event, the three of them swapped the top spot several times as they worked through traffic.  When the checker fell, it was McHaffie in his No. 67 Flatout Motorsports Mazda MX-5 who grabbed victory.

“The front-wheel drive Honda guys were able to get a little more than me in the rain,” McHaffie said. “I played it safe the first couple laps. When the dry line started to come up, we hit some lapped traffic that allowed me to get back up to those guys.  They put up one heck of a fight, it was door-to-door the entire time, and I was lucky enough to finish out front.”

Picking up right where they left off Saturday, the warriors of Formula F again put on an exciting display Sunday that, at times, almost resembled a beautiful ballet.  At the front Sunday was Matthew Cowley, Jonathon Kotyk and Saturday winner Andrew Bujdoso.  The triumvirate went speeding along wheel-to-wheel and taking cracks at the lead from one corner to the next.  But after the final corner on the last lap, it was Kotyk in his No. 81 Gapuard Mygale FF who had enough of a gap to take the win.

“It was definitely tough, but the race played out really well,” a grinning Kotyk said after climbing from his car. “I started the race a little bit further back, so I had to just play it smart and work my way forward.”

The conclusion of racing at Watkins Glen International brings to a close the inaugural Hoosier Racing Tire SCCA® Super Tour season.  However, the Hoosier Super Tour Nationwide Points Championship for each of 28 classes isn’t over. This year’s SCCA National Championship Runoffs®, being held on the road course at the iconic Indianapolis Motor Speedway, also counts toward the Nationwide Points Championship.  So, the battle to see who is the best will resume Sept. 29-Oct. 1 during three days of top-flight racing in Indiana.