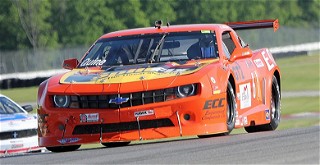 In GT-2, Aaron Quine took back-to-back victories over the weekend in his No. 61 Spillfix/ECC/ShultzMizer Machine Chevrolet Camaro TA2.  For Quine, Saturday’s race went off without a hitch and he managed an easy drive to victory.  Sunday, however, wasn’t so simple as Max Nufer in his Chevrolet Monte Carlo GTA filled Quine’s rearview mirror for much of the race.

“Sunday’s race was interesting,” Quine said afterwards.  “Got a good start, but on the second lap my power steering went out. I saw Nufer on my tail and wasn’t sure I could hold him off the whole race.  But I put my head down and manhandled this car.  I had a good race with Nufer for a while, but then saw something happened to him in ‘Thunder Valley’ and he was gone.”

In the same race group, Saturday’s GT-3 winner, Paul Young, went on to claim a win Sunday in his No. 79 Young Racing/Hoosier Tire Ford Probe.  On Saturday, he was hounded most of the race by Chad Bacon’s Toyota Celica.  On Sunday, it was GT-3 driver Ken Nelson in a Nissan 200SX who filled Young’s rearview mirrors and pushed him right to the checkered flag.

Some intense, nose-to-tail, open-wheel racing took place later in the day as storm clouds gathered to the west of Mid-Ohio.  Saturday’s Prototype 1 winner, David Locke in a Stohr WF1, jumped to the lead early followed by Bryan Putt.  Locke seemed to have things locked up, but suddenly fell off the timing charts after lap eight.

“David Locke took off and I was just doing my best to hang with him, keep pressure on him and hope he’d make a mistake,” said Putt, driver of the No. 55 BSPort/Aires Elan DP02. “We were going up into the ‘Keyhole’ and he tried to pass a slower car on the inside, and that was the mistake.  He spun to the inside and that gave me the open track.  It’s my first Hoosier Super Tour win and I am stoked.”

The Formula 1000 race was also hotly contested during the afternoon.  Saturday winner Nicho Vardis, in a JDR F1000, led the field early.  But Vardis never felt comfortable at the front this day as Jeremy Hill, in the No. 00 Hoosier Tire Photon VD07, filled his mirrors and moved to the front after five laps.

“Hill passed me on the back straight.  He had a good draft and got by me,” Vardis said afterwards.  “There was nothing I could do, but I stayed with him for a couple corners, side-by-side.”

That, however, wasn’t the end of the Formula 1000 trial.  A few laps later, a full-course yellow was called and the field bunched together again.  Vardis positioned himself to make a challenge for the lead, but Hill was having none of it.  As soon as the race went back green, Hill hammered the throttle and was off on his way to victory.

And once again Sunday, F Production winner Kevin Ruck duplicated his efforts almost exactly from the previous day.  At the start, Ruck found himself languishing in the fifth spot in his No. 73 Hoosier/Honda/Hawk/Hasport/SloMo Acura Integra.  But as the race churned on, he slowly moved forward, picking off John Walker’s Lotus Super 7, and the Mazda Miatas of both Mason Workman and David Bednarz as he marched to victory.