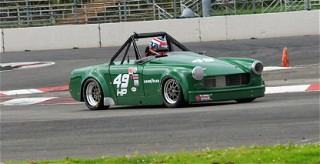 PORTLAND, Oregon (May 21, 2017) – Looming on the horizon north of Portland is Mount St. Helens.  Almost exactly 37 years ago, that volcano exploded with a force nearly 1,600 times the strength of an atomic bomb.  On Sunday, an equally awesome force shook the region as the Hoosier Racing Tire SCCA® Super Tour held its final West Coast race of the year at Portland International Raceway.

This weekend’s Spec Racer Ford Gen3 competition featured two reigning SCCA® National Championship Runoffs® winners.  On track at the same time was defending Spec Racer Ford champion Todd Harris, as well as defending SRF3 champion John Black.  The duel delivered as hoped both Saturday and Sunday.  At the start of each day’s race, Harris and Black fought it out immediately for the lead going into the turn-one chicane, with Steve Fogg hanging right in the fight.  And on both days, Harris managed to get out front early.

What also happened both days was Black, driving the No. 17 CSR Performance SRF3, managed to get ahead of Harris and hold on through a hard fight for the win.  On Saturday, Harris was hounded by Fogg and was unable to keep in Black’s tow.  And on Sunday after a full-course yellow bunched up the field, Harris just didn’t have enough to pass Black.

“Each day, my car would get better and better as the races went on,” Black said.  “I think Harris and Fogg had cars going the other direction.  But there was good competition here this weekend in Portland.  You had to screw your head on right and you couldn’t back off.  That raises the chance you’ll drive off the track. But if you want to win it, you’ve got to go for it.”

Harris admitted that Black’s car was perhaps a bit faster this weekend, especially in the corners that led onto straightaways.  But by no means is the war over as far as this year’s Spec Racer Ford Gen3 Hoosier SCCA Super Tour Point Championship.

“John and I have raced each other for 20 years, so it’s always fun racing with him,” Harris said.  “I think all of us are going to turn around and do this again at the June Sprints Hoosier Super Tour.”

Another driver who made an impact over the weekend was Tristan Littlehale in his No. 08 TC Design/Red Line Oil/G-LOC Brakes Mazda Spec Miata.  Saturday, he ran the first part of the race back in third as Steven Powers and Daniel Langon fought it out for the lead.  Powers held the prime position early, but the pack simply wouldn’t let him rest.

“I was hoping we’d hit some lapped traffic so I could get a little bit of space on the pack, but it didn’t work,” Powers said after Saturday’s race. “I got loose and got crossed up, then the field just freight-trained me.”

Langon moved to the front of the field for a bit, and stayed right in the fight for a time.  But he succumbed to Littlehale and Marco Gallaher for a third-place finish.

“It was a pretty crazy race, but great competition,” Langon said Saturday.  “I knew nobody was going to run away and that it would be close to the very end.  There was passing every lap and it was a lot to handle.”

Littlehale earned the win Saturday and went on to prove a point Sunday with a dominant, flag-to-flag victory featuring a 15-second margin of victory.

“On Saturday, I was riding things out to see how things would go,” Littlehale said.  “The top three or four guys all had it in them for the win.  There were some weak spots of mine and stronger spots for other people, but I just wanted to see how it shuffled out at the end of the race.  But everyone brought their ‘A’ game this weekend.”

In Formula 1000, Larry Vollum and Gary Hickman had two great days of racing at Portland, with both drivers earning a win over the two days.  Vollum, in his No. 5 CV Medical Phoenix MV14, took the win Saturday and Hickman, in his No. 76 Edge Engineering Inc. Phoenix F1000, took the race Sunday.  But both swapped the lead a few times during each race and really pressured one another to perform at their best.

“It was a good race,” Hickman said Sunday.  “There were sections where I was a little bit faster, and I felt like I could out-brake Larry into the chicane.  So, I capitalized on that.  We knew Larry was going to be fast.  Larry is like the Formula 1000 benchmark around this track.  There is nobody around who knows this track as well as he does. So, finishing ahead of Larry is a feat in itself.”

While some motorsports fans perhaps had their attention turned to Indy 500 qualifying over the weekend, a little bit of Indy was on display during the Hoosier Super Tour in Portland.  The back-to-back winner in H Production over the weekend was Parker Johnstone in his No. 49 Wilsonville Honda MG Midget.  Johnstone has been an SCCA member for many years, starting out in autocross and moving on to claim a GT-4 SCCA National Championship Runoffs win.  In the years that followed, he was a pro driver in multiple series and even went on to compete in the CART World Series.  Today, he’s back with the SCCA and eyeing a win at this year’s SCCA® National Championship Runoffs® being held at Indianapolis Motor Speedway.

“We found this car on eBay, of all places, and it looked like it had been parked in the middle of a Missouri corn field for years,” Johnstone said about his current car.  “But we knew, being a Huffaker chassis, that underneath all the hay, the stubble and the rust there was a good platform to build on.”

Following an excellent weekend at Portland International Raceway, The Hoosier Super Tour now moves back east for the June 2-4 event at Mid-Ohio Sports Car Course.  Follow all the action live at www.scca.com/live.