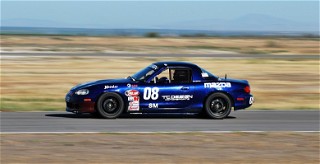 BUTTONWILLOW, Calif. (April 29, 2017) – Rain and even snow swept across portions of the United States Saturday.  But California’s Central Valley was having none of it as absolutely gorgeous conditions welcomed nearly 200 competitors to Buttonwillow Raceway Park for the opening day of Hoosier Racing Tire SCCA® Super Tour competition hosted by SCCA’s Cal Club.

The series’ seventh stop of the year began with a Spec Miata oddity.  Tristan Littlehale, in his No. 08 TC Design/Red Line Oil/G-LOC Brakes Mazda Miata, grabbed the lead on the first lap and remained completely unchallenged for the entire event, ending up with a winning margin of more than 10 seconds.  For those familiar with SM competition, that doesn’t happen too often.

The Touring 2 race later in the day, however, was anything but a runaway.  Tom Wickersham, in his No. 01 Competition Autowerks Ford Mustang, went to the front and held the lead for more than half the race as Bill Collins gave chase in his No. 63 Interstate Truck Driving School Chevrolet Corvette.

“I got caught up behind a car that was slow in certain areas, and someone laid down some oil,” Wickersham said after the race.  “That allowed Bill’s Corvette to catch up, and the battle was on.”

Collins moved to the lead with five laps remaining.  He pushed hard to get a gap on Wickersham wherever possible, but Wickersham stayed right on his tail, filling up Collins’ rearview mirrors at certain spots.  At exit of the last turn, the rear of Collins’ Corvette could be seen wiggling as he tried to get the power down.  But Wickersham was a bit faster out of that corner time after time.  In that last turn on the last lap, Wickersham got grip and pulled alongside Collins for a drag race to the checkered flag.  On the timesheet, the margin of victory reads 0.001 -- with Collins claiming the win.

“I was just trying to hold him off those last couple laps,” Collins said afterwards.  “On that last turn, my back end kept stepping out.  My car gets loose as I go through a race.  It was getting way loose today and that was a problem.  The high-speed stuff, I was OK.  But the lower-speed turns, I kept sliding out.”

“It was a heck of a race,” Collins continued.  “That’s SCCA at its best.  Tom stuck his nose in a few corners, but he kept it clean.  And I shut the door on him a few times.  But it was great ‘gentleman racing.’  You can’t beat it.  That was the best!”

Later in the day, another exciting race developed in the Super Touring® Lite class.  In that event, Robert Strohmeyer took an early lead and looked strong in his Honda CRX HF.  But after seven laps, it was Tim Auger who had the top spot.  Thomas Lepper joined the fight in his Honda Civic, as did Ken Fukuda.  The battle was fierce for the win, but ultimately it was Fukuda who crossed the finish line first in his No. 124 GriffeyDreams Racing/ Marin Acura/Cafe Tapioca/HPD/Hoosier Tires/G-Loc Brakes/Summit Racing Acura Integra.

“I saw all those guys battling in front of me.  I was really pushing my tires just to keep up.  But I saw them fighting up front, and I’m not really sure what happened to them. Somehow, I passed them and ended up with the checker,” Fukuda said.  “This is my lifelong dream.  I’ve been working three jobs and stuff.  To actually get here and race has been amazing.”

When all was said and done Saturday on the track, a buzz in the paddock remained as workers, racers, crew, family and friends joined together for a magnificent taco party.  The shindig’s joyous hum carried on the cooling breeze to meet a sun setting behind western hills.  But things warm up again Sunday as a second day of Hoosier Super Tour competition continues at Buttonwillow Raceway Park with 35-min or 50-mile morning and afternoon races starting at 10:20 a.m. Pacific Time.  Follow all the action live at www.scca.com/live.