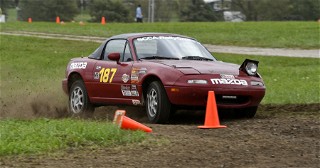 The most significant change to the SCCA National RallyCross program this season is the addition of DirtFish Rally School as the title sponsor for the three National Challenge events and National Championship. More information about this partnership can be found here.

There are some other minor changes to the format of these events. Competition runs will start later in the day on Saturday to allow for longer Check-in and Tech hours. This later start is intended to help participants save the cost of a hotel room on Friday night when possible. Additionally, to allow more runs on Saturday, only one course will be laid out per day. Due to the nature of RallyCross competition, the course will evolve during the day. Instead of a human draw, grid positions will be calculated by computer to allow for faster grid sheet generation and earlier posting.

In 2017, online registration is shifting back to MotorsportsReg.com for National RallyCross events. Entries for the DirtFish SCCA National Challenge events are capped at 120 with a fee of $95 each. With the return to MotorsportsReg, non-annual SCCA members can purchase a weekend membership while registering online.