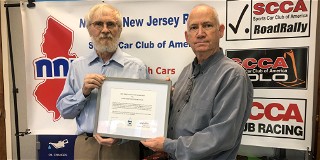 It’s not often that an environmental group gives a motorsports group an award – but the two are not necessarily at ends with each other. SCCA’s Northern New Jersey Region (NNJR) found that out on Oct. 12, 2022, when the New Jersey Highlands Coalition (NJHC) presented NNJR with one of its annual awards.

The NJHC is an independent, non-profit organization with a mission to represent the common goal to protect, enhance, and restore the multiple environmental, historical, and cultural resources and values of the nearly 1,000,000 acres in the New Jersey Highlands and to preserve the quality and quantity of drinking water provided by the region. That water goes to the 850,000 people who live in the Highlands as well as the more than five million people in surrounding areas who depend on the Highlands water for some – or all – of their water source.

SCCA’s Northern New Jersey Region, currently led by RE Peter Schneider, has supported that mission over the years, providing rallies and tours of the area since at least 2015 both as SCCA Region events and as stewards of their community. Schneider, alongside Bob Shore, has been involved in this endeavor from the beginning.

“Everyone knew and loved Wilma [who is now retired and living in Massachusetts] and it was most appropriate to name this award after her,” Julia Somers, NJHC Executive Director, said. “Recipients are people who have volunteered their time for the Coalition and the Highlands in a way that helps us achieve our mission. Peter and Joanne Schneider and Bob Shore most definitely fit that description, having worked hard with my colleague, Elliott Ruga, to help create and make it possible for us to offer many wonderful and informative car treks around the New Jersey Highlands over several years. We are delighted to be able to recognize them this year with this award.”

Congratulations to SCCA’s Northern New Jersey Region for this award – it’s yet another example of how SCCA Regions remain active in their home communities on and off the racetrack.