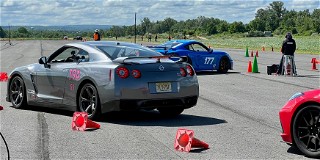 The Tire Rack SCCA Solo National Tour just completed back-to-back weekends of competition, the latest taking place June 17-19, 2022, in Romulus, NY, at the Tire Rack SCCA Finger Lakes National Tour. Some 209 drivers found their way to the grippy asphalt of Seneca Army Depot in the western portion of New York for the event hosted by SCCA’s Finger Lakes Region. And with nearly half of the attendees tent camping on site, the weekend really kicked into gear when the Region fired up the barbecues for Friday’s welcome party.

Some morning precipitation mixed with breezy and chilly conditions were a challenge on Saturday, but come Sunday, clear skies and temperatures in the 60s allowed drivers to hit the course with confidence.

There were 20 entrants vying for six trophies in the Street Touring™ Sport (STS) class. In the largest field of the weekend, Brandon Dean and his 1990 Mazda Miata held the top spot on Saturday by only 0.04sec over Andrew Salazar in a similar car.

Dean improved on Sunday in STS and landed a 0.778sec victory over Salazar. Brad Fiore was third in a 1992 Mazda Miata, and Brandon Dryer was fourth in a 1991 Honda Civic Si. The fifth spot went to Matt Huchro in a 1996 Mazda Miata, and the final trophy was given to Shaun Hallam driving a 1990 Mazda Miata.

D Street (DS) often produces great competition, and the 10-entrant class continued that form in Romulus. Dave Potocki, driving a 2021 Honda Civic Type R, had the lead on Saturday by 0.197sec over a 2020 Honda Civic Type R driven by Alex Piehl. Only 0.071sec behind Piehl was Mark Daddio in a 2022 Subaru BRZ.

On Sunday, Potocki held solid in DS and claimed victory. In second was Daddio, now 0.076sec behind. William Koscielny, who sat fourth on Saturday in his 2021 Honda Civic Type R, finished third. Piehl fell to fourth and scooped up the final trophy.

A baker’s dozen found themselves carving up the cones in Street Touring™ Roadster (STR). Saturday saw 0.258sec separating leader Josh Luster, in a 2019 Mazda Miata MX-5, from Billy Davis and his 2019 Mazda Miata.

Complete results from the Tire Rack SCCA Finger Lakes National Tour can be accessed by clicking the button below.

Things are getting interesting in the Solo National Tour Points Championship, which is new for 2022. Scores have already been uploaded from the recent Tire Rack SCCA Peru National Tour, and the standings will be updated in a few days with results from the Tire Rack SCCA Finger Lakes National Tour event. Click the button below to access the scoresheet.

Registration for events is open now. Spots are limited, so click the link below to secure your entry.