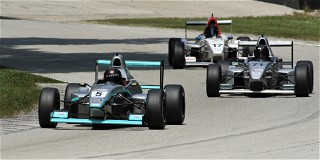 Sunday brought to a close the 66th running of the WeatherTech Chicago Region® June Sprints® at Road America in Wisconsin, an event included on the 2021 Hoosier Racing Tire SCCA Super Tour calendar. Sunday races were 13 laps except for the final event, which was 15 laps.

A Healthy Formula: Back in 2018, SCCA and SCCA Enterprises created a new Formula Enterprises 2 (FE2) class. Since then, the class has continued to see growth and produced some great racing. That fact was certainly evident this weekend at Road America during the Hoosier Super Tour as a field of nearly 20 competitors were on hand to battle for a cherished WeatherTech Chicago Region June Sprints victory.

On Saturday, longtime SCCA racer and multi-time June Sprints winner Scott Rettich claimed another victory in the No. 17 Alliance Autosport/Red Line Oil SCCA Enterprises FE2 car. On Sunday it was Max Grau who was in command for 12 of the race’s 13 laps. But behind him the entire time was Bailey Monette in the No. 5 OPTECH car. Monette swept Hoosier Super Tour wins at Michelin Raceway Road Atlanta earlier this year, and came to Road America this weekend looking for another win. On the final lap Sunday, Monette made a pass at Turn 5 to take the lead and go on to victory by just 0.291 over Grau.

“I planned to just stay behind him and kind of apply pressure. I noticed throughout the race that he was slipping and sliding as the tires wore off,” Monette said on the victory podium after the race. “The stars aligned for me, and I got to pull it off. This is my first June Sprints, actually, so this is a special one. And one I will not forget.”

Breaking in a New(ish) Car: The more things change, the more they kind of remain the same. That very much seems to be the case for Greg Gauper when it comes to racing in the H Production (HP) class.

This is the first full season Gauper will have to break in his “new” HP No. 15 Honda Civic SI. For those unfamiliar, Gauper has been running a Honda Civic in Club Racing for just about 18 years, and an HP Runoffs victory in 2011 behind the wheel of a Civic is included in that history. But in 2019, his trusty Honda had come to the end of its competitive lifecycle.

“Old faithful, the one that won the National Championship … that car had a hard life. It wasn’t a very good car to begin with as it had a lot of rust in the subframe. At its last race, the car was just totally undrivable,” Gauper admitted.

So, Gauper began the hunt for a new car and found out that an exact match of his old racecar was available. It was the Honda Civic SI owned by the late Jerome Zimmermann and had been sitting in a barn for 17 years.

“I used to race against that car back when I ran ITC,” Gauper noted.

After purchasing the new-to-him Honda, Gauper started swapping over some of the useful parts from his old car. He ran the “new” car at the Runoffs last year, but 2021 will be the first full year Gauper will be developing his latest Honda.

Certainly, it has been a bit of a struggle. But things are coming along. Saturday was difficult at the June Sprints as his car did not finish the race won by Eric Vickerman in the No. 10 Goodyear/Vickerman Racing MG Midget. Sunday, however, was much better and he grabbed the runner-up podium spot in a race won by Mark Brakke’s No. 04 Mazda 2 machine.

Saturday’s victory went to Mike Miserendino in the No. 95 MBI Racing car by only 0.033 over Brian Schofield. And unfortunately, Schofield came up just short again on Sunday, this time finishing second by 0.087 to the No. 19 Flat Out Racing car of John Black. While Schofield has triumphed previously at the June Sprints, he missed out this weekend on two more victories by a scant 0.120 of a second.

For Black, the victory was something very, very special. After 24 tries at winning a June Sprints race, he was finally able to do it Sunday.

“I just got lucky. And sometimes it’s good to be lucky,” Black said with humility. “It’s so hard here at the June Sprints. People here have just such good skills and know how to put themselves in the right spot for drafting. It’s just a whole lot of thinking that has to be done.”

And like nearly every racer at any Hoosier Super Tour event, Black thanked all the workers and volunteers who make SCCA racing possible. He also had one more shoutout.

“My mom, I got to thank. She’s been listening to me when I’ve been talking about car racing and asks me how things are going. I know she doesn’t care, but she still acts like she does. It really, really feels good for her to do that for me,” Black said with great sincerity and a big smile.

One to Go: With competition completed at Road America, the only “regular season” Hoosier Super Tour race weekend left on the schedule is June 18-20 at Watkins Glen International in New York. Registration for that event, hosted by SCCA’s Glen Region, is now open! After that, the only chance to amass points towards the Hoosier Super Tour Championship takes place at Indianapolis Motor Speedway during the 2021 SCCA National Championship Runoffs.

More information about the Hoosier Racing Tire SCCA Super Tour from Road America during the WeatherTech Chicago Region June Sprints, including full results, can be found at the event webpage.