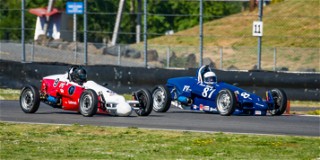 Huffaker in a Nissan? Yes, you read that right. “Little” Joe Huffaker, inducted into SCCA’s Hall of Fame in 2020, spent this Hoosier Super Tour weekend driving a Nissan Sentra in the GT-Lite (GTL) class. Known best for building amazing British racecars that win Runoffs championships, many eyebrows were raised at the sight of Huffaker in something completely different.

So, here’s the scoop. The car, which is up for sale, actually belongs to Lans Stout who is a longtime friend of Huffaker. Stout asked Huffaker if he’d like to come to PIR and take a spin behind the wheel, and Huffaker couldn’t resist.

“I thought, ‘hey, I’ll go do that,’” Huffaker said. “It’s a good, powerful car. And I wanted to experience a different car.”

On Saturday, Huffaker was having a great race for the GTL lead with Scott Twomey when the two touched slightly. Unfortunately, the contact was enough to loosen Huffaker’s driver-side door, which fell off. Twomey went on to victory in his No. 11 Poulsbo RV/Pat's Autosport/Loyning's Engine Service/TopTech Motorsports Toyota Tercel, and Huffaker soldiered along breezily for a second-place finish.

On Sunday it was Michael Lewis, in the No. 3 Goodyear Mazda RX-7 racecar, who recovered from engine problems Saturday to take the win. Huffaker ran second in the early portion of Sunday’s race, but succumbed to Brian Linn and his Nissan Sentra SE-R that finished in the runner-up position.

With the weekend completed, is Huffaker considering a major shift in his GTL racing plans?

“I don’t need to own three GTL cars,” he said with a warm grin.

Follow the Dancing Vees: Before the weekend even began, you could guess the Formula Vee (FV) fight was going to be a good one. With competitor names like Andrade, Posner and Lundberg on the entry list, you just knew we were in for some exciting, strategic racing. And indeed, FV didn’t disappoint.

On Saturday, Quinn Posner did a dance lap after lap with Dennis Andrade. The duo swapped the top two spots lap after lap in a game of drafting “chess” with the result in question until the checkered flag. The opening day’s race went to the No. 87 D&D Racing Vortech of Andrade, which finished ahead of Posner in his Protoform P3 by 0.07 second. In third was the Caracal C1 of Melanie Lundberg only 0.7 second back of Posner.

Sunday saw a case of “second verse same as the first” with Posner and Andrade at it again most of the race. Andrade started the last lap in the lead and held on by the skin of his teeth for a fraction-of-a-second, side-by-side win over Posner.

“A lot of Formula Vee races, it’s a matter of measuring your opponent. Where he can pass you and where you can pass him, where we were quicker and where he was quicker. Honestly, we were really dead close today,” Andrade said of Posner. “That’s the kind of race you live for. We had a great time. If I would’ve finished second, I’d be just as happy.”

Switching Stories: The GT-3 class seems to get more and more interesting as 2021 progresses. On Saturday in Portland during the Hoosier Super Tour, first place went to Troy Ermish and his No. 38 Goodyear Tires/Rebello Racing Engines/Troy Ermish Inc/Tightlines Guide Service Nissan 240SX. Ermish ran second behind Michael Lewis for the first half of the race, but found himself out front after Lewis had an engine problem and exited the event a little before the halfway point.

“I missed a gear at the start and that cost me the opportunity to get into Turn 1 with the lead,” Ermish said. “I just kept fighting. I was better than Mike in some of the technical sections, but he definitely had ‘motor’ on me. It was exciting and I love having the opportunity to race hard with a big-time champion like Lewis.”

On Sunday, it was Ermish who took the lead early with Lewis giving chase. But shortly into the 25-lap race, Ermish fell back to second as his car was experiencing a throttle issue. Lewis stormed by in his No. 3 Goodyear Mazda RX-7 and headed off to victory with a winning margin of 2.449 seconds. After the race, Lewis gave thanks to his crew who put in long hours to get a fresh engine into the car.

Annual June Sprints Ahead: This weekend’s action at PIR was the second and final West Coast Hoosier Super Tour event for the year. Racers now get a couple weeks off before Hoosier Super Tour competition resumes June 4-6 in Elkhart Lake, Wisconsin for the WeatherTech Chicago Region® June Sprints® at Road America.

More information about the Hoosier Racing Tire SCCA Super Tour from Portland International Raceway, including full results, can be found at the event webpage.

Photo: Dennis Andrade, in car No. 87, and Quinn Posner, in car No. 9, spent much of their Saturday and Sunday Hoosier Super Tour Formula Vee races as pictured -- side by side.