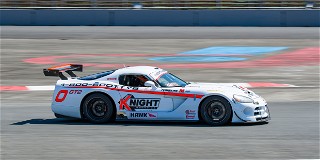 Harris Hoard: With four family members on the grid, representing three generations, there was a slightly better chance someone with the last name “Harris” would take victory in Spec Racer Ford Gen3 on Saturday. But Caleb Shrader had other ideas. Swamped at the start, polesitter Shrader dropped back. But by the end of the first racing lap, he was back up front. He then built nearly a 5-second lead before a full-course caution bunched up the field and laid the groundwork for a two-lap shootout.

At the restart, Shrader controlled the lead. And coming around the final turn toward the checkered flag, Shrader was ahead. But Taylor Harris, driving the No. 22 Pro Drive Racing/Flat Out Racing/HMS SCCA Enterprises Spec Racer Ford, closed in on Shrader, popped out of the draft and got to the checkered flag first by only 0.031 of a second.

Taylor, 18, is the youngest of the Harris clan competing at PIR this weekend. His work Saturday netted him his first Hoosier Super Tour victory.

“It’s good to have this time out here with my grandpa Bill, my dad Todd, and my brother Calvin all racing on the same track. It’s something special and I kind of hold it dear to my heart,” Taylor said. “The speed difference is not too big between us Harrises.”

And what about Todd? Is he a proud papa?

“Both my sons, we’re virtually identical on lap times. Last summer, they both beat me in races,” Todd said. “The fact that both the boys are this fast and competitive makes me really proud.”

On the Mend: Scotty B. White has had a rough couple months. Back in January, he injured his shoulder at Auto Club Speedway in California. He shook off the injury, thinking the discomfort would go away after a while. But as time passed, the annoying soreness remained. In fact, he developed a nagging headache to accompany the backpain.

Finally, White went for some physical therapy, but that did no good. In fact, he felt worse and kind of fluey. A week after that, he developed a fever and opted to get a COVID-19 test. Sure enough, he tested positive.

“I didn’t have any of the regular symptoms,” White says. “All I had was a headache.”

As someone who has lived with asthma, White was concerned, but not scared. That was until his blood oxygen level dropped to below 90 percent. At that point, White mustered his remaining strength and went to a hospital.

In SCCA competition, White races some big American cars. His GT-2 car is the No. 0 GOT CDL?/Hawk Brakes/Extreme CMT Dodge ViperComp Coupe. It’s a fast, mean looking machine that he drove to a GT-2 win Saturday at the Hoosier Super Tour in Portland. But while that car looks like a handful, White said it has never scared him as much as COVID-19 did.

When White arrived at the hospital, doctors took quick action. Still, he remained in the emergency room for three days.

“The scary part was that after the first six or seven hours in the hospital, they had my oxygen level up to 97 percent, my headache was gone, my fever was gone and I was feeling good,” White recalls. “The next day, I tanked again in the hospital.”

After four days, doctors finally sent White home where he admits to staying at home, sleeping for the next two-and-a-half weeks.

“I just slept day and night,” White said. “And I watched Netflix. ALL of it. Twice through, I think.”

White’s lethargy lingered for another week or two. Today, he still gets worn out a little faster than usual. But he’s super excited to be out at PIR doing what he loves with Sports Car Club of America. So much so that on Saturday White also competed in the Touring 2 race which was ultimately won by the No. 47 SFSECURITY.COM/DIG Motorsports Ford Mustang GT driven by Mikhail Butenko.

Getting There is Half the Fun? The Saturday B-Spec race was won by Fritz Wilke in the No. 84 Mobil 1/Frozen Rotors/Capaldi Racing/Hoosier Tire/BTCC Blueprints/Ink Frenzy/Hawk Brakes Ford Fiesta. But it’s longtime B-Spec competitor WC Storms who has fought the hardest battle so far. The Canadian has been combating COVID-19 travel restrictions to compete alongside his daughter, Cherie Storms, at this weekend’s Hoosier Super Tour in Oregon.

To get the two B-Spec competition cars from Canada to Portland, WC had to receive exemptions from both the Environmental Protection Agency and Department of Transportation. The cars also had to be bonded to ensure they’d be returned back to Canada within a year. And since he couldn’t drive across the border from Canada to the U.S., WC had to pay to have the two racecars shipped to Cherie in Washington.

The trial doesn’t end there, however. Once Cherie received the cars, they were loaded into a trailer and began the trip south to PIR. Meanwhile, WC paid for and cleared a COVID test so he could jump on a plane bound for Portland. But during a stopover in Seattle, he learned that the hauler carrying the B-Spec cars had experienced a problem. So, he bailed on the second part of his flight, borrowed a trailer from a friend outside Seattle, loaded the cars onto that trailer and continued the road trip with Cherie.

WC finished third in his Honda Fit on Saturday, and Cherie’s Mazda 2 went out early with mechanical issues. You can’t help but root a little for WC, partially because of what he faces on the return trip home. He wanted to fly, but that would require proof of a negative COVID test before getting on a plane to Canada. Then, he could be required to quarantine at a government-approved hotel on his own dime before being sent home to quarantine another two weeks. So instead, WC will get his COVID test and just drive back across the border.

What’s the total cost of coming to play with SCCA this weekend? Don’t ask. But you can’t help but feel the duo is really just excited to be back alongside one another at the track.

More information about the Hoosier Racing Tire SCCA Super Tour from Portland International Raceway, including full results, can be found at the event webpage.