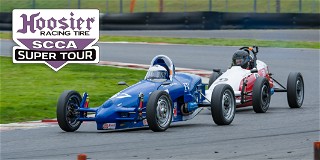 It’s been two full years since the Hoosier Racing Tire SCCA Super Tour has visited Portland International Raceway (PIR). On the Hoosier Super Tour calendar since the series’ inception, a “break” from Portland was taken in 2020 due to COVID-19 restrictions. But it’s back in 2021 to this event hosted by SCCA’s Oregon Region, and racers are rarin’ to go.

This two-day event gets rolling at 8:30 a.m. Saturday, May 15 with 20-minute qualifying sessions for each of the seven race groups. Then starting at 12:20 p.m. Saturday, each group will have a 25-minute race around the 1.97-mile, 12-turn circuit that includes the recently renamed Shelton Chicane. Then on Sunday, May 16 a second round of 15-minute qualifying begins at 9 a.m., followed by 35-minute or 25-lap races starting at 12:15 p.m.

Keeping an Eye on the Action

Who will win Spec Racer Ford Gen3 (SRF3) this weekend at PIR? Like pretty much every weekend in SRF3, it’s a toss-up. Mike Miserendino, John Black, Steve Fogg and a couple others will likely be found at the front of the pack. And keep an eye on those with the last name “Harris.” You’ve got grandpa Bill, father Todd, and sons (or grandsons) Calvin and Taylor all on track and looking to do well in SRF3 competition.

Fun will surely be found in GT-3 with the likes of Troy Ermish, Taz Harvey, Michael Lewis and more scooting around PIR in that hotly contested class. Then there’s GT-Lite where Lewis will appear again along with folks like Joe Huffaker, Tim Linerud, Brian Linn, Lans Stout and Scott Twomey.

It only takes two to tango in Formula Vee (FV). And when you add five others to the dancefloor, things can get really interesting. Look for some strategic drafting along PIR’s two straightaways, and some opportunistic passing from Dennis Andrade, Charlie Turner and a pair of Posners. But with the way FV racing goes, don’t count out Mark Edwards, Marjorie Lundberg or Donald Manthe.

Wrapping Up the West Coast

This weekend’s visit to PIR is the second of two West Coast stops on this year’s Hoosier Super Tour. The first was back in February at Buttonwillow Raceway Park in California. After PIR, competitors have a two-week break before Hoosier Super Tour action resumes at Road America for the WeatherTech Chicago Region® June Sprints®.

After the June Sprints, the 2021 Hoosier Super Tour season comes to a close June 18-20 at Watkins Glen International in New York. That will be the last Hoosier Super Tour points earning opportunity before the 2021 SCCA National Championship Runoffs taking place Sept. 25-October 3 at Indianapolis Motor Speedway. But while the Hoosier Super Tour season wraps up in June, road racers still have plenty more chances to compete in July, August and early September through SCCA’s U.S. Majors Tour program.

Tune In to See What Happens

Hoosier Super Tour fans can follow all the action live from PIR online at SCCA.com/Live or click the banner on the front of SCCA.com to access live timing and scoring, as well as live video and qualifying/race calls supplied by Hoosier Super Tour Radio. And be sure to check out the SCCA Road Racing Facebook page to watch post-race winner videos and victory podium celebrations.