What’s In A Number? Lots! 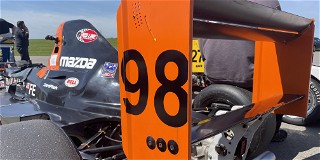 Numbers tell us a lot on a race car. Though occasionally that changes, drivers start to become as recognizable as cars and numbers as they do people and faces.

But how does that particular number come about? That depends on the person.

For some, it was handed to you and stuck.

For instance, Kurt Rezzetano usually can be found behind the wheel of a 37 car – a number he was “gifted” by his team at Phoenix Racing.

“37 was the first number I drove in IMSA, so I just stopped at 37 after that,” he said. “I won my first National Champioship with 37 so I stuck with that over the years. When I raced motorcycles, I was always 21. But when you run with Phoenix, it’s always in the 30s. 37 just happened to the be car I was driving and I just stuck with it over the years.”

For others, like Max Gee, the number goes back to birth – literally. And that number carries through to superstitions beyond racing.

Rob Piekarczyk’s B-Spec car sports the 99 as an evolution number, beginning with his dad and morphing into a childhood racing hero.

“There’s actually a long story behind it. My Dad ran nine in Showroom Stock, and ran number zero for a while, too, so for a long time it was 09. That was taken by my good friend Gary Martz, who has since passed, so I didn’t want to do that and just let it be. Growing up Greg Moore was always a favorite, and it just kind of evolved into 99.”

Others don’t have a choice – and it really wouldn’t matter to Kevin Allen if he did, because a number is a number. He runs 64 because the car belongs to Bob Lenz, and 64 is Bob’s number – kind of.

“That was Bob’s number,” Allen said. “He used to be 46, and when he started running Nationals Jim Goughary had it. So he converted it and made it 64. I’m ok with that, it works for me. I historically ran 44 on the Prod Car, but I’m not that particular. I can’t see it from inside the car!”

Others have a strategic reason for a number, even if that strategy doesn’t matter anymore. James Libecco picked his number for SCCA autocross – where numbers are more than just an identifier – and carried it over to road racing.

“It comes out of my time starting out 20 years ago in autocross,” Libecco said. “The higher your number is, the later you would start, the more rubbered down the course is. I wanted to be 99, but that was taken. I was 97 for a long time and I tried to register for an event and it was taken, so the next thing you know you’re 98. I aged up in the class, I guess, and it’s been with me ever since.”

So no matter the number, at this weekend’s Hoosier Racing Tire SCCA Super Tour from Pitt Race and beyond, there’s probably a story behind the number – even if the story is “there is no story.”