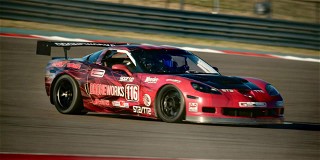 So it is, without a doubt, a pleasant surprise when someone like Justin Oakes climbs the charts and brings home the class win, like he did in Sunday’s Hoosier Super Tour feature race. Oakes moved his Chevrolet Corvette around Brad McAllister on the final lap of the race to win.

But it wasn’t just any win.

“This is my first win in SCCA!” Oakes said after the race. “This is awesome. That car is literally brand new. This is the first time it’s been on track. They’ve been working for weeks, day and night on this damn thing, and it was delivered this morning. It was teched this morning. It was the first time on track and we just wanted to finish and now I’ve got all this. It’s awesome.”

That’s not all, though. Each group at every Hoosier Super Tour has a chance to win door prizes at the podium following Sunday’s races. Oakes’ luck continued there, when his name was drawn for a Summit Racing Equipment bench mat.

Open Wheel Madness: The two groups of open-wheel cars had some some bad luck on Saturday, but more than made up for it on Sunday. One spin in the opening corner for Group Five and the quicker, winged open-wheel cars and prototypes, set off a chain reaction of nose to gearbox contact and a long, long caution period during Saturday’s race, while Group Seven’s Formula F, Formula 500 and Formula Vee cars didn’t even get to race after track damage in the Group Six race.

Group 7 both began and ended the day with their weekend races in a true doubleheader. And the fastest cars on the track, Group Five, had a fantastic battle.

Hans Peter scored the overall Formula Atlantic win over Charlie Peter in their traditional Formula Atlantic Swift/Mazdas, while behind them a four-car train of modern Honda-powered Ligier Formula FR Americas machines were nose-to-tail for the length of the race with Huntery Yeany finishing third.

Further back for the FX class win, Sabré Cook’s old-school Formula Mazda topped the USF2000 Elan DP08 of Robert Wright with a last-lap pass, and Nick Persing led a train for Formula 4 Ligier/Hondas for third in the class.

Bon Voyage and Best of Luck: One young SCCA member won’t be making many more Hoosier Super Tour events this season – but we’ll consider it an excused absence.

Jak Crawford will be racing this season around the globe, competing in the FiA Formula 3 Championship that mirrors much of the Formula One schedule. As a Red Bull Junior program participant, Crawford’s seven-race season will take place mostly in Europe, with the finale back here in Austin in October.

The 15-year-old, who turns 16 just about the time the season gets underway in May, is no stranger to being away from home, however. He finished fourth in F4 Germany and 6th in the Italian F4 Championship a season ago.

Stripling, who has won countless Spec Racer Ford races over the years, has worked with some buddies to build an STL-eligible Scion FR-S that was meant for endurance racing. But since it meets the STL rules, why not run it?

“It’s a really neat car,” Stripling said. “We bought this car to go endurance racing with. Literally we’re out here just playing with it. With the top National cars in STL, it’s wildly uncompetitive. But that’s ok.”

Unfortunately, that ended on a sour note. Stripling’s car – heavy on Saturday – rolled across the scales underweight after the longer Sunday’s race. Ever gracious and unintentional, Stripling waived Danny Steyn to the top of the podium so that he could accept the glory and pomp and circumstance of the win. Still – this feels like the start of something new, and spectacular, for Stripling.

The Exuberance of Youth, The Benefit of Experience: 15-year-old Trevor Russell had a fantastic day on Sunday in Formula F.

Russell took the win in the day’s opener – the make-up from Saturday – and then had a thrilling back and forth battle with David Livingston, Jr. in the matinee. The two swapped the lead early in the race, and then the youngster pulled away to cap the day with a pair of wins.

Meanwhile, in the same group, Formula Vee veterans were in a classic duel. Hunter Phelps-Barron, Zachary Whitston and defending national champion Chris Jennerjahn were locked in a duel. Just like the earlier version, however, Phelps-Barron swept the day and took both wins.

Winning Numbers: On track on Sunday were eight group races, each 30-minutes in length (or 14 laps) at the 3.4-mile Circuit of the Americas, the second Hoosier Super Tour event of the 2021 season. Provisional winners were (* denotes weekend sweep):