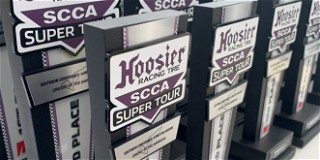 The Hoosier Racing Tire SCCA® Super Tour season continued Saturday at Circuit of the Americas (COTA) in Austin, Texas, during a weekend hosted by SCCA’s Lone Star Region. The first day of the two-day event featured qualifying followed by 10-lap or 25-minute races on the 20-turn, 3.4-mile circuit famed for the Formula One U.S. Grand Prix. Racing continues on Sunday, beginning with qualifying at 8:00 a.m. CT, and 14-lap (or 35-minute) races to follow. Live timing, results, streaming audio and static cameras are available at www.scca.com/live.

For 33.95 of those miles, Grayson Strathman sat behind Dave Ogburn and Richard Stevens in the Spec Racer Ford Gen3 race on Saturday, only to learn that a race isn’t over until the first car crosses the checkered flag.

Strathman’s No. 119 Shock Top Beer Spec Racer Ford was in third on the final lap, chasing Ogburn and Stevens into the final corner. When Stevens tried to dive to the inside, both he and Ogburn pushed wide, opening the door for Strathman, who beat the duo to the line by 0.217-second.

“I just tried to keep calm and stay in position, hoping that something would go wrong because Dave was way faster,” Strathman said. “Richard was setting an awesome pace the whole race. Richard made a move in the last corner and it didn’t work out for them, and I was able to go up the inside and take the win.”

Open Class: Sports Car Club of America® added two classes to the Hoosier Super Tour/U.S. Majors Tour® roster in the past couple seasons for former professional race cars and those vehicles that didn’t fall directly into established classes. The new Prototype X (PX) class is, naturally, for Prototype cars that fit the rule set; GT-X does the same for cars with fenders.

To date in the Hoosier Super Tour, the concept has been successful. On Saturday at COTA, Judd Miller won overall in the big bore group driving his PX No. 64 Radical SR8 ahead of multi-time National Champion Mike Lewis’ No. 12 Goodyear Jaguar XJR GT-1 race car.

First Time Is the Charm: Aaron McSpadden made a last lap pass around Tony Roma to take the B-Spec win on Saturday and did it all in his maiden voyage in the No. 75 Honda Fit.

“Yesterday was the first time I drove it,” McSpadden said after the race. “I set him up in the Esses over there and we got alongside each other on the back straight. We were braking at the same time and I held him next to me and was able to hold him off the rest of the way.”

Family Affair: It’s been a long time since Tim Hollowell has been in a race car. Six years, in fact.

After the backing for his USF2000 effort fell away, Hollowell stepped away from the race car. He kept his kart, but largely was out of the car until a set of circumstances aligned to climb aboard the No. 37 Alliance Autosport Formula Enterprises/Mazda in the Formula Enterprises 2 class.

Hollowell returned in a big way, claiming the win on Saturday at COTA.

Those circumstances? He borrowed the car that belongs to his sister, Amy. Amy, with the help of their father, recently purchased the Formula Enterprises 2 machine. But with the spring semester of college in full swing, Amy was unable to make it to Austin for this weekend’s race. That left big brother Tim an open seat to bring home a trophy.

And yes, she knows he took the car. Or, at least, she will now.

Double Double: Tim Kezman and Mike Lewis both saw their trophy case grow by two trophies each on Saturday. Lewis won in GT-1 and, later, in GT-Lite driving the No. 132 Goodyear Mazda RX-7. Just for good measure, he added a runner-up for the RX-7 in GT-3 trim.

Kezman swept the field in his Fall-Line Porsche 911 in both Touring 2 and GT-2.

“It’s fun to come,” Kezman said about the Hoosier Super Tour at COTA. “It’s a great track. As always, the car was flawless. The Fall-Line guys do a great job.”

Formula Vee Replay: When we last saw Andrew Whitston, he was standing atop the podium at the Runoffs at VIRginia International Raceway, holding his gold medal with Hunter Phelps-Barron and his brother, Zachary Whitston, right there with him.

You’ll forgive anyone, then, for wondering if they stepped into a time warp on Saturday in Austin. Andrew once again headed the podium in Formula Vee, with – you got it – Phelps-Barron and Zachary following behind.

Whitston’s No. 12 Rocket Motors/Subway/Hoosier Protoform P2/Volkswagen scored a narrow 0.029-second win over Phelps-Barron on Saturday, crossing the stripe just inches in the lead in a classic Formula Vee battle.

That margin of victory means that, in two races, Phelps-Barron has lost twice to Whitston by a combined 0.109-second. Stay tuned for Sunday’s race, and look for yet another classic.

Scoring Update: SCCA’s live timing page at Hoosier Super Tour events and the Runoffs has always held the most available data, including the only location for segment times from each and every driver.

A recent update has optimized the screen at www.scca.com/live for mobile device, with modifications including light/dark mode, better sorting by class, and other changes that make the screen more phone-friendly. More details can be found here.

Photo: Lots of hardware up for grabs at this weekend’s COTA Hoosier Super Tour