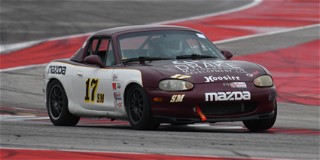 Tyler Quance managed to gobble up two class championships in the Southern Conference this year. In Spec Miata, Quance came out on top by only nine points over Trevor McCallion in a field of 75 competitors. Then in Touring 4 (T4), Quance drove a Mazda MX-5 to the championship by earning 16 more points than the Mazda RX-8 of T4 runner-up Sergio Zlobin. It should also be noted that Mark Snyder earned his second championship of the year by claiming the Southern Conference’s Formula Enterprises (FE) title. His first FE championship, driving an SCCA FE Mazda, came earlier in the Mid-States Conference.

There were several Southern Conference championships decided this year by only a handful of points. The GT-3 championship actually ended in a tie as Gary Grantham, in a Datsun 240Z, and Chad Bacon, in a Toyota Celica, shared GT-3 top honors this year.

The battle in both Prototype classes was tight, too, in the Southern Conference. Darryl Shoff took the Prototype 1 victory by only two points over John McAleer, and William Munholland was a single point behind McAleer in third place -- with all three drivers piloting Elan DP02 racecars. Then in Prototype 2 it was Marvin Hodges and his Lola T 598 who bested second-place finisher Jack Donnellan and his Lola B07/90 by only eight points.

Five points was the winning margin in Spec Racer Ford Gen3 (SRF3), which had nearly 80 challengers this year. With six victories in the Conference, Denny Stripling earned the top SRF3 spot over Whitney Strickland. Then in Touring 1, six points was the difference as Colin Cohen and his Audi TTRS claimed the championship over the Ford Mustang of Paolo Salvatore. And the Touring 3 finish was just about as close with Stephen Jeu and his Honda Civic Si collecting seven more points than runner-up Glen Morris in a Porsche Boxster.

Rounding out the tight Conference battles was the Formula F class where Randy Acock, driving a Van Diemen RF98-Honda, emerged victorious over the Spectrum 014 Honda of Alex Trubey by only 10 points.

The Southern Conference began its season in late January with an event at Motorsport Ranch just southwest of Forth Worth in Cresson, Texas. The second stop on the Conference schedule was a Hoosier Racing Tire SCCA® Super Tour at Circuit of the Americas in Austin, Texas. March then saw a second Hoosier Super Tour event at Hallett Motor Racing Circuit in Jennings, Oklahoma. Then it was back to Texas in May for Round 7 and Round 8 at MSR Houston, followed by another stop at Circuit of the Americas in June. The season then closed in late August back at MSR Houston.

The Sports Car Club of America®, Inc., founded in 1944 and currently celebrating its 75th Diamond Anniversary, is a 67,500-member motorsports organization that incorporates all facets of autocross, rally and road racing at both Club and professional levels. With headquarters in Topeka, Kansas, the SCCA annually sanctions over 2,000 events through its 116 Regions and subsidiary divisions. Much of the SCCA’s activities are made possible with support from the following Official Partners: Hagerty, the Official Insurance Partner of SCCA; Hawk Performance, the Official Brake Products of SCCA; Sunoco, the Official Fuel of SCCA; and Tire Rack, the Official Tire Retailer of SCCA. To learn more, please visit www.scca.com.

Photo: Tyler Quance took two Southern Conf. class championships this year. One was in Spec Miata (pictured), and the other in Touring 4 driving a Mazda MX-5