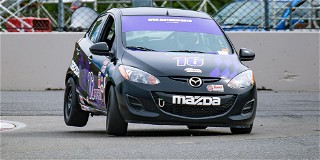 PORTLAND, Ore. (May 19, 2019) – Acknowledged as a premier amateur road racing series in North America, Hoosier Racing Tire SCCA® Super Tour winners can truly take pride in their accomplishment. But emerging victorious more than once in the same weekend at a single event, that’s something to be cherished. And that’s exactly what a handful of drivers achieved this weekend at Portland International Raceway (PIR) during a two-day event hosted by SCCA’s Oregon Region.

Driver Scotty B. White can legitimately lay claim to an exalted status after earning three first-place finishes over the course of 48 hours. On Saturday, White scooped up the Touring 3 (T3) win in his No. 0 GOT CDL?/Extreme CMT/Hawk Brakes Ford Mustang. On Sunday, White was again victorious in T3 on the 1.97-mile, 12-turn circuit, but also slipped into his Ford Mustang for a GT-3 win later in the day.

A racer who brought home two wins was Bill Collins, a serious challenger frequently seen at Hoosier Super Tour events. In his No. 63 Interstate Truck Driving School Chevrolet Corvette, Collins drove to both Touring 1 and Touring 2 victories on Sunday.

“This is the first time I’ve ever done this,” Collins said about grabbing two wins on the same day. “Racing in SCCA keeps me young. We love this stuff and I’m going to keep doing this forever. I’m almost 69 years old and I’m going strong.”

Speaking of strong, Formula Mazda champion Melvin Kemper took wins Saturday and Sunday in his No. 4 Goodyear MSR Formula Mazda. But the wins didn’t come easy. On both days, Kemper had to fight with Bill Weaver and his Star Formula Mazda.

“Bill got a really good jump Sunday, and it was on,” Kemper said. “I caught back up in traffic and we seesawed a little bit. He’s pretty quick and tough. Bill would’ve been really tough to pass … but he got caught up a little bit in some traffic.”

B-Spec racer Cherie Storms, in the No. 16 WCS Motorsports Mazda 2, also managed back-to-back wins on the weekend. However, it came at a price. Cherie and her father, Ford Fiesta driver W.C. Storms, were fighting for the B-Spec victory when they both came across a portion of track slicked down by the fluids of another racecar.

“We were having a great race, me and my dad, and I was so happy keeping him behind me,” Cherie said. “But there must have been oil down in turn 12 and my car just took off and hit the wall, and dad took off behind me and we were both in the wall.

“I was able to get out of the wall and finish the race,” Cherie continued. “It was important for me to finish the race, even if they were slow laps. I’m just happy to finish and really happy to race with my dad. Big thanks to my dad … and we got some work to do on these cars after this weekend.”

With two of three Hoosier Racing Tire SCCA Super Tour events out west now complete, the series packs up and heads east for a May 31-June 2 weekend at Mid-Ohio Sports Car Course in Lexington, Ohio -- a venue that has hosted several SCCA National Championship Runoffs® over the years. More information can be found at www.SCCA.com.