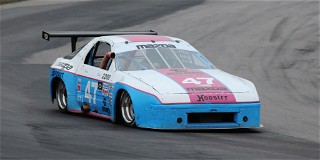 The F Production (FP) race Saturday was thrilling, indeed. That excitement started right back up again Sunday morning as Charlie Campbell’s Mazda Miata put a solid gap back to the rest of the field. Eight laps in, however, a full-course yellow bunched the field back up and put Saturday’s winner, Ken Kannard in a Mazda Miata, and Kevin Ruck, in the No. 73 Hoosier/Honda Acura Integra, right behind Campbell.

On the restart, the top three FP competitors stormed off to settle things amongst themselves. On the final lap, Kannard got by Campbell, but spun in a corner. From there, it was left up to Ruck and Campbell, with Ruck holding a slight advantage.

“I knew the car was good,” Ruck said. “We went side by side, and I was able to hold on for the checkered flag. It was a super exciting race. To race with these guys is a privilege, and an absolute riot.”

Some top GT-1 drivers were also on hand at VIR this weekend to wow spectators. Tony Ave, in the No. 04 Chevrolet Corvette, was on pole and set the pace Sunday after his car broke Saturday and slid into a tire wall while leading. After a full-course yellow, Ave found himself hounded by David Pintaric’s Cadillac CTS-V and the Jaguar XKR of Michael Lewis. And while Pintaric poured on the pressure, Ave held tight for the win Sunday.

“The guys worked really late last night and we got the car back together,” Ave said. “The thing was perfect today.”

The Spec Miata race, coming in just short of 65 competitors Sunday, was another barn burner. The usual cast of characters were in the hunt, including Tyler Kicera, Jim Drago, Todd Buras and Elivan Goulart.  But as laps ticked away, the fight for victory was between Nicholas Bruni, Preston Pardus and Danny Steyn. At the finish line it was Steyn in the No. 39 Adept Studios/Rossini Engines/OPM Autosports/G-LOC Brakes Mazda Miata who was 0.118-second ahead of Pardus.

“I want to congratulate Preston and Nick,” said Steyn, who also won both Super Touring® Lite races over the weekend. “The three of us went side by side into the top of the roller-coaster (corners). We had a very slight touch, but such clean racing with good friends. I really love this class, Spec Miata, and really think it’s some of the best racing in the country.”

Spec Racer Ford Gen3 racers presented another formidable field Sunday with nearly 55 drivers taking the green flag. After spinning off course during Saturday’s race, Robeson Clay Russell claimed the lead early in Sunday’s race and led flag to flag in his No. 31 SVN/Angry LLama/Comprent racecar. But make no mistake, competitors Brian Schofield and Saturday winner Tray Ayres were right on his tail.

“There’s not much to say about Saturday. I just lost control, spun it around and put it in the grass,” Russell admitted. “Today, Brian and Tray closed on me pretty quickly, but time just ran out. If there was more race, they would’ve been up there battling for the win. But I’m happy with the win.”

This weekend’s GT-3 Hoosier Super Tour events at VIR took on special importance as both races were part of the GT-3 Challenge presented by MPI, a series supported by Mazda, Max Papis Innovations, Penske Racing Shocks, AiM Sports and Hoosier Racing Tire. The GT-3 Challenge consists of five events held around the country, culminating with October’s SCCA National Championship Runoffs®. As a class, GT-3 is gaining momentum once again, with two competitive and exciting races this weekend. It was Stacy Wilson, driving the No. 47 Hoosier Tire/Mobil 1 Mazda RX-7, who managed to win both races, but not without a fight Sunday from Taz Harvey. The two swapped the lead a couple times, but touched with only a few laps remaining.

“Yesterday’s race was really good,” Wilson said. “Today, I want to say a big apology to Taz Harvey. I didn’t mean to get into him. I just went in hot, tried to make a pass on him and I just ran out of talent.”

With the Hoosier Super Tour complete at VIRginia International Raceway, the series now packs up and heads to the West Coast for the first time in 2019 for a weekend of racing April 26-28 at Buttonwillow Raceway Park found in California’s Central Valley. More information can be found at www.SCCA.com.

Photo: Stacy Wilson swept the GT-3 class this weekend in his Mazda RX-7