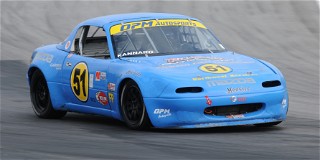 ALTON, Va. (April 13, 2019) – Inclement weather played a role during the first two days of Hoosier Racing Tire SCCA® Super Tour activity on the 18-turn, 3.27-mile road course at VIRginia International Raceway in Alton, Virginia.  Practice and qualifying were conducted under wet conditions most of Friday at the event hosted by SCCA’s North Carolina Region before threatening storms brought an early end to the opening day.

For the nearly 500 drivers competing across 28 classes in nine different race groups, Saturday morning brought hope as sunshine poked through scattered clouds for early morning qualifying. However, the rain came back with a vengeance later in the morning during qualifying, but diminished as Saturday races came around.

Moist conditions made the first race of the day quite interesting, especially in the F Production class.  There, polesitter Charlie Campbell jumped out to the lead in his Mazda Miata. But behind him, Ken Kannard in the No. 51 Northwest Cable Construction/Hoosier Racing Tire/G-Loc Brakes Mazda Miata made a terrific start from the fifth position and soon found himself challenging Campbell for the lead, which he grabbed on the fourth lap.  But a few laps later while working through traffic, Campbell got back by for the front spot. Then on the last lap, Kannard was able to make a daring pass for victory.

“It was a crazy race,” Kannard said. “Charlie and I broke away from the group and we just went at it. I just luckily got by him on the last lap, held him off at the top of the hill, I kind of almost spun … it was a mess. But I’m happy to get the win by half a car length.”

In the same race, B-Spec drivers John Phillips and David Daughtery, both driving Honda Fits, also had a great fight for the win. Phillips moved to the front early and held the lead for the first three laps. But Daughtery remained right on his tail and moved to the front on the fourth lap, going on to take the win in his No. 10 Carbotech/Hoosier/Ktuner racecar.

“John got caught in a little bit of traffic and that bogged him down,” Daughtery said about being able to catch his competitor. “Quite honestly, we were even as could be. He just got caught by a little more traffic than I did, which allowed us to get the win today.”

Early in the afternoon, the 70-car Spec Miata field also took to the track under wet conditions. Several competitors spun into the grass on the first lap, bringing out a full-course yellow.  Polesitter Nicholas Bruni had the lead, followed by Brian Henderson and a whole host of skilled, proven drivers. But at the restart, Bruni pushed wide going into turn one and Henderson grabbed the lead.  Meanwhile, drivers who perhaps didn’t have great qualifying sessions were making a charge to the front, including Danny Steyn who started in the 22nd position. With a handful of laps left in the race, Steyn had managed to close to within one second of the leader, but second place was all he could manage as Henderson claimed the wet win in his No. 97 BDL Motorsports Mazda Miata.

“On the restart it looked like Bruni got in a little hot and I was able to get under him and took off from there,” Henderson said. “Then it looked like Danny almost got to my bumper. He was giving it everything he got, but couldn’t quite make it happen at the end.”

The action continued into the fourth multi-class race of the day featuring the GT-1, GT-2, Touring 1 (T1) and American Sedan cars. It was Andrew Aquilante, in the No. 33 Phoenix Performance Ford Mustang, who took both the GT-2 and overall victory in that race. But a real cliffhanger developed in T1 where stalwart Mark Boden held the lead for the first five laps before handing the top position to John Pasch, both driving BMW M3s. Then Bill Baten made it an exciting race tor the T1 win in his No. 39 Van Winkle Baten/Hoosier/Backstreet Chevrolet Camaro.

“It was a mess out there from the beginning, just carnage everywhere,” a smiling Baten said about the challenge. “The first half of the race, I was just trying to avoid wrecking. The second half, there was a little more space to get going faster and make selective passes when it was safe. I made the last pass for the win on the last lap in one of the last turns. It was storybook for me. It was awesome.”

In keeping with what has become a tradition on the Hoosier Super Tour; volunteers, competitors, crews and families gathered together Saturday night at the All Participant Party to share a meal and some good comradery. It was a pleasant respite prior to a second day of Hoosier Super Tour racing which gets underway Sunday at 8:45 a.m. Eastern Time. Follow all the action live at www.scca.com/live.