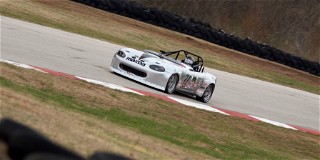 JENNINGS, Oklahoma (March 31, 2019) – The Hoosier Racing Tire SCCA® Super Tour wrapped an intense two-day event this weekend hosted by Ark Valley Race Group at Hallett Motor Racing Circuit, capping the fourth of 11 events in the 2019 season. Running races on Sunday at 35 minutes or 27 laps in length, there were battles throughout the day.

Sunday’s racing was close. How close? Try 0.017-second in one case. That was the final margin of victory in Spec Miata, where Jim Drago edged in front of Matt Reynolds in a side-by-side drag race out of the final corner. Drago’s No. 2 East Street Racing Mazda Miata led the first 13 laps from the pole, before Reynolds moved to the point. Reynolds was the official leader through lap 22, when the duo swapped positions once again as they worked through lapped traffic.

Drago was the official leader at the white flag, but Reynolds swooped to the lead on the final stanza.  On the gas, Drago moved to the inside in the final left-hander, and the two crossed under the wire in a photo finish.

“I really think Matt had it with about three to go,” Drago said. “I made a little mistake and had a little gap, and he caught a lapped car at the worst time and allowed me to close up the gap. We just put some pressure on at the end. I tried to get a couple of moves in and he shut them down pretty good. Going into 10, I take a little different line than Matt does, I’m a little tighter. He left me about a car and an inch and I stuffed it in there pretty good.”

That inch is all it took for Drago to sweep the weekend.

Reynolds nabbed his win just a couple of hours later. In what could be an early-season preview of this year’s SCCA National Championship Runoffs® at VIRginia International Raceway, Reynolds and Jesse Prather started the race having qualified just 0.037-second apart on Sunday morning. Reynolds took the lead from Prather on lap 13, then set a new track record with a lap of 1:20.896 (80.103 mph) on the 16th lap. One small mistake by Prather in his BMW Z3 gave Reynolds’ No. 71 Reynolds Bros. Racing/Hoosier/JPM/Vintage Connection/G-LOC Brakes Mazda Miata some breathing room, and that was the gap the three-time National Champion needed to take the win.

“I’m kind of beat up this weekend,” Reynolds said. “I had some close races. I was just trying to hang on Jesse’s bumper in the first half of the race and see what happened in the later half. Jesse ended up making a mistake going into turn two, and when you’re running that close that’s all it takes.”

Mark Kirby and Don McMillon got the jump at the green flag in the big bore group, putting their GT-2 cars in the overall lead early on. Though eventual GT-1 winner David Fershtand, in the No. 05 Fershtand Race Prepared Chevrolet Corvette, was able to sneak by for the overall win, the GT-2 battle raged early. McMillon took the lead early in his Corvette, but Kirby stayed on his tail until taking the lead on lap three. McMillon stayed on his tail until a spin with five laps to go, ending his day early and allowing Kirby’s No. 21 Dodge Viper to collect the checkered flag.

“Don had me, no doubt,” Kirby said. “I started with higher pressures than he did, so I was quicker the first half. Then it flip-flopped, and he had me the second half and I was hanging on. It’s too bad for him that he spun, because he would have had it.”

“I didn’t have a great start,” Snyder said. “(Robert) Vanman got past me and I was like ‘heck yeah, this is going to be a great race.’ It was awesome competition. I got around him and set some track records. I kept pushing, and I saw some spun out cars. So, I just kept my foot in it.”

The Hoosier Super Tour continues in just a couple of weeks, April 12-14 at VIRginia International Raceway for what many consider to be a preview of this year’s National Championship Runoffs in October. More information can be found at SCCA.com.