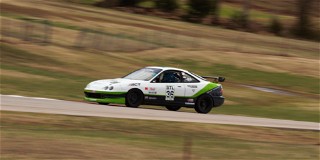 Officially, the temperature at the green flag was 44 degrees. Unofficially, with winds steady at 20 mph and gusts even higher, the wind chill was listed at 37 degrees and felt even colder at the event hosted by SCCA’s Ark Valley Race Group.

The cold temperatures immediately came into play, especially in the tires. Cliff Johnson, the Formula F polesitter in the first mixed-class race of the day, spun on the pace lap and fell behind not only the Formula F field, but the Formula 500 and split-start Formula Vees.

Still, Johnson marched his No. 4 Alpine Lithographics Piper DF/Honda through the field and around then-leader Mike Sauce, taking the first win of the day.

“I spun on the pace lap,” Johnson said. “I was always afraid of doing that and I did it today. It was okay, because I wanted to run from the back anyway. It was good exercise. I caught Mike Sauce, and he’s a good racer and a good friend. I’ve known him a long time. We just clicked off laps together, and I was lucky enough to beat him.”

A couple of Spec Miata heavyweights traded blows on Saturday, where Jim Drago bested Matt Reynolds in the 25-minute race. Both spent their share of the race in the front of the pack, but Drago’s No. 2 East Street Racing Mazda Miata earned the top spot by holding off Reynolds on the final lap.

“Matt is probably the best guy at this track, period,” Drago said. “Matt and I have had door-to-door races here for 10 years and counting. I can race Matt like I can’t really race anybody else. We went two-wide through several corners that you’re not supposed to go through two wide with no contact. Hopefully we can do it again tomorrow!”

While Jesse Prather was winning the production group overall in the E Production No. 34 Jesse Prather Motorsports/Hoosier/Carbotech BMW Z3, Chris Albin spent the early part of the race fighting off a challenge from Ralph Lindow as the pair worked through traffic. Once Albin was able to clear a handful of cars, he was able to sneak away for the win in his No. 3 Hoosier/247-parts.com/AMT engines Volkswagen GTI/Golf

“The race went well,” Albin said. “My new engine is awesome and the car handled well. It was a little cold, but we got the tires to stick.”

Spec Racer Ford Gen 3 may have topped them all, with a wild battle between Denny Stripling and Grayson Strathman. Lead changes, consistent laps, and one mistake helped Stripling’s No. 4 Southeast Spec Racer/Lightspeed Motorsports Spec Racer Ford to the win.

“We had a great field, over 30 cars today,” Stripling said. “Grayson Strathman and I had a monumental battle. I made a rookie mistake and hit the rev limiter on the start and fell back to third. He and I ran probably 10 or 12 laps in a row with a couple second gap between us with identical times. He’s thinking ‘how am I going to drop this guy,’ I’m thinking ‘how am I going to catch this guy.’ I managed to get the lap record somewhere in there, and his car got a little loose on him. I got by him and he tried to go back by me in turn two, locked up his rears, and hit me in the side and spun me out. Neither one of us could get our cars re-fired. But we both got our cars re-fired, managed to make it to the checkered flag. It was an eventful 25 minutes.”

The day ended with a thriller in Super Touring Lite. While Charlie Peter, in a BMW 235i Touring 2 car, and Chris Haldeman, driving a Honda Civic in Super Touring Under, were racing for the overall win, Runoff podium finisher Brian Laughlin and National Champion Cliff Ira were running nose-to-tail for the class win.

When Laughlin got his Mazda Miata sideways in Turn 1, Ira had to check up and nearly came to a complete stop in the grass. Laughlin made a fantastic save and opened up a lead, while Ira dropped down the order. Steadily closing the gap and picking up positions in his front wheel drive No. 36 Fira Motorsports/JPM Acura Integra, Ira was within range of Laughlin when the white flag came out.

Still reeling him in on the final lap, Ira moved under Laughlin in the final corner and snuck by for a 0.23-second win.

“Brian got really sideways and I had to avoid him and dropped back to fourth place,” Ira said. “I just put my head down and ripped off the fastest laps that I could. Just a lot of fun.”

Saturday concluded with participants warming up with a party at the base of the Hallett tower with food and drinks. Sunday features 15-minute qualifying sessions followed by 35 minute or 27 lap races beginning at 8 a.m. CT. Follow all the action live at www.scca.com/live.

Photo: Cliff Ira was the Super Touring Lite Winner on Saturday at Hallett.